Claw of a thermopod. Structures in the form of red eggs have been found in this fossil. Ed. Laurent Mekul

Researchers at Imperial College London have discovered structures that look like red blood cells and collagen fibers in dinosaur fossils 75 million years ago. Six of the eight bone fragments analyzed have detected remains of organic structures. According to researchers, the discovery indicates that soft tissue remains may be more frequent than expected in tens of millions of years of fossils. In fact, samples that did not have special conservation conditions have been deliberately selected to carry out the research.

Remains of organic components have already been found in fossils as old as those studied, but as they are specimens especially well preserved, they have been considered as exceptions. “It has been good that proteins do not last more than four million years, according to researchers in the article published in the journal Nature Communications, “and that only partial traces are preserved for longer.” However, “the results now presented suggest that the storage of soft tissues and more complex protein structures is a more common phenomenon than was considered,” they added. 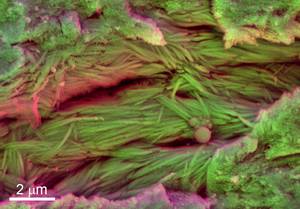 The samples analyzed belong to the collection of the Natural History Museum of London, where representatives of the two main sides of the dinosaurs have been selected. Electronic transmission microscope (TEM), scanning electron microscope (SEM) and other complementary techniques have been used to observe these structures. The composition has been studied by mass spectrometry. Thus, they have seen that the composition of the structures that look like the red blood cells is much like that of the bird cells. In addition, the braided structure of collagen has been observed and traces of amino acids that form the protein have been detected.

The conservation of proteins on a geological temporal scale allows investigating the physiology and behavior of animals that have long disappeared. Therefore, “the simplest fossil could also merit molecular analysis,” they said.