In Zumaia last week, one hundred places in the world were recognized as being fundamental to the development of geology. One of those places is the Flysch of Zumaia, who met around him, in a four-day congress, geologists from all over the world. They celebrated the 60th anniversary of the International Association of Geological Sciences (IUGS). Asier Hilario Orus is director of the International Committee on the Geological Heritage of this organization. 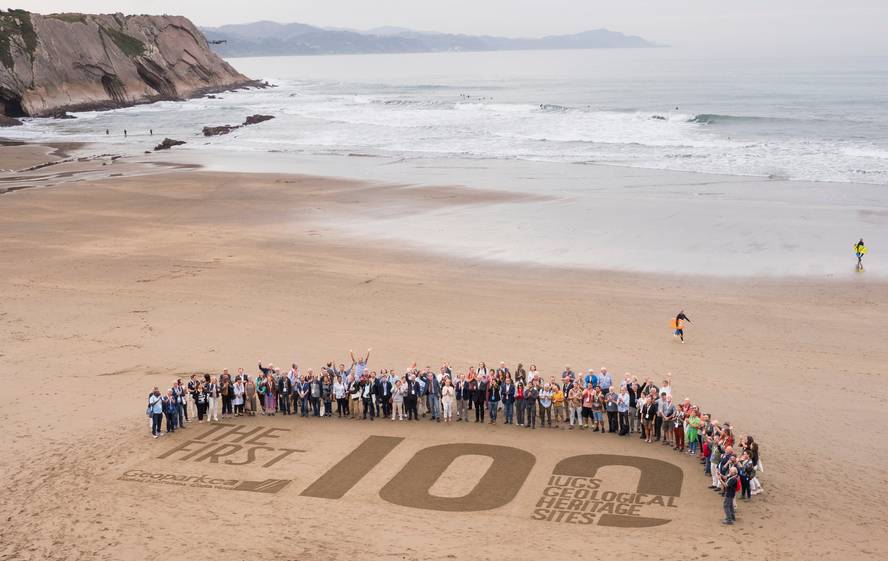 Ed. Costa Vasca Geopark
What was the act like?

In short, perfect. The entire congress was round. And in particular, the final event we held in Itzurun with the reading of the Zumaia declaration and the official announcement of the 100 seats. Everything went perfectly, and proof of that is how many messages we're getting in recent days from anywhere in the world. 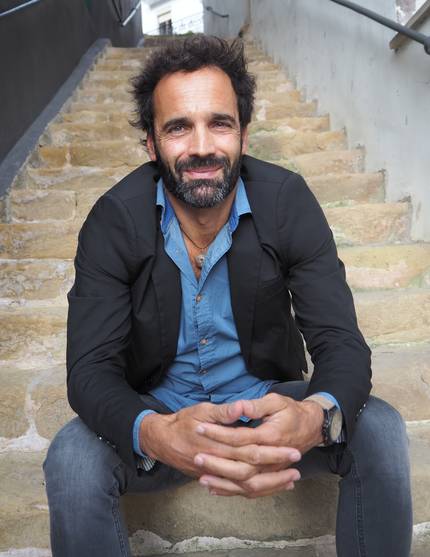 Asier Hilario Orus, Director of the International Committee on Geological Heritage of the IUGS and Scientific Director of the Geopark of the Basque Coast. Ed. Costa Vasca Geopark

It's one of the largest scientific institutions in the world. It has representatives from 121 territories and over a million seconded scientists. Sixty years ago, it was created with the clear goal of setting standards in the geological sciences. In fact, geology was developing in different parts of the world differently, and often calling things differently. Then there was a need for a union through an international organization.

The different committees of the IUGS (International Union of Geological Sciences) decide how geological time is divided, how to call geological elements, how to classify rocks, etc. Well, in 2016, the Geological Heritage Commission was created, and two years ago, I assumed my coordination. We saw the need for a program that protects the entire community of geologists and recognizes the places that have served to build our science.

You've recognized a hundred places. What do those places have?

These are environments that have geological elements and/or processes of international scientific relevance, but in particular those that represent a significant contribution to the development of geological sciences throughout history. In other words, they are one of the best examples of their kind worldwide and have opened the door to the development of new ideas. These are places that have allowed us to develop our science.

In this case, only the scientific aspect is assessed. No, for example, their educational, or tourist potential, or their beauty, which can also be valued when recognising heritage. In this case not only scientifically, it is the International Geological Community that values them.

Among these places is the Flysch de Zumaia.

Yes, Zumaia is one of the most studied geological outcrops in the world. Over many years, many scientists have come from different places to look for information, because it's a place with a lot of information. In 200-300 m of Zumaia, there are only more than 200 high-level scientific articles and doctoral theses at more than 20.

For what purpose have they carried out these examinations?

The recognition by the science community of these places that have been fundamental for the construction of their science, in this case the geological sciences. There is no more, it is very simple in this regard.

Next, we hope that this recognition will serve to protect unprotected areas or to promote unincentivized areas.

It would be logical to think that such important places are already protected.

In these fabrics there are many well-known places, national parks, UNESCO world heritage site, Grand Canyon, Kilimanjaro, Iguazu… But there are many others that are unknown to the general public. For example, the oldest rocks in the world or the oldest remains of life in the world. There are about 15 places that are the best outbreaks of the most important moments in life's history. Some are protected, but others are not. We hope that this recognition will be a good argument for protecting these places. 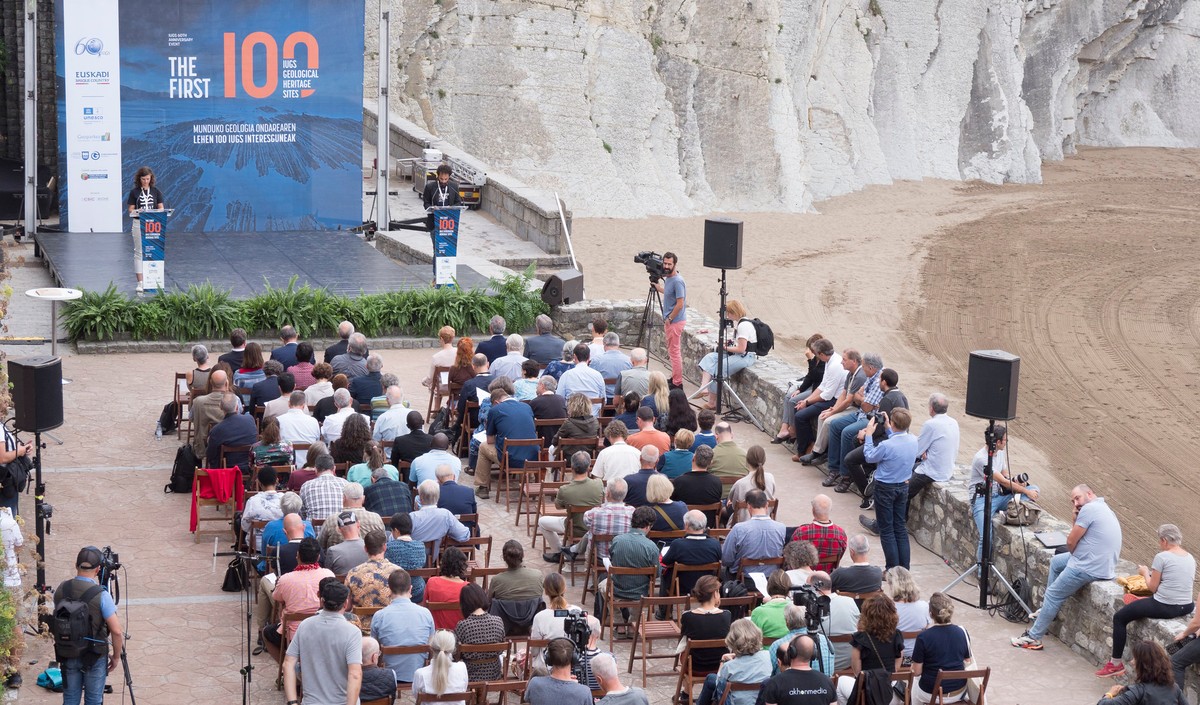 They finished the act by reading the Declaration of Zumaia. Ed. Costa Vasca Geopark
Congress has had the presence of some of the world's greatest experts.

It is worth noting the attendance of some 140 people, but more than that, it would highlight the presence of representatives from 42 different territories. As for Zumaia, it has been an honour for the other places to receive this recognition. 64 out of 100 seats have been presented at the same location. For any geologist, the truth is that for a child it's been like going to Disneyland. The main geologist in the Grand Canyon explains what that place is and why it's so important, then Perito el Moreno, then Poas volcano, and so on. We've had the opportunity to first meet these superplaces. Seeing the program seemed just dizzy.

And it's been very interesting to bring together scientists from all disciplines. Here were the paleontologists, the mineralogues, the cartographers, the geomorphologists ... It has been very enriching. The whole process has actually been very enriching. To build the network that we've had to complete since we started a year ago. In this process, the interest shown by participation and collaboration is highlighted.

You start with a hundred. Will they be more?

Yes, they're the first tissues, they're not the best ones. We have been clear from the outset that this is a project that we are going to develop for several years, and we are going to gradually recognise more places. We don't know how many will be.

But we were clear that we had to start with a big number to start the project hard. And we have succeeded. They have already written from several countries, expressing their desire to propose new places.

They put the end to the act by reading a statement, the Zumaia Declaration.

We realised that with this project we were having very broad support. The project has ten other geological organizations worldwide, supported by the majority of the global geological community. So we saw that it was a good opportunity to make a statement. The declaration will have geology as its sole purpose.

And it has three main ideas. Firstly, to highlight the role of the earth sciences in the face of the environmental, social and economic challenges that we will have in the coming years. Climate change, water, minerals, renewable energies and fossils. In all of these things geology is fundamental, because we need to know well the possibilities that the Earth system gives us.

Secondly, to promote basic research. It is essential to know how the system works to understand how it can react at any time.

Thirdly, the commitment to the protection or recognition of the geological heritage. That is, to understand that, like some plants, animals or monuments are heritage, there are geological elements that have intrinsic value. And their recognition and management.

These are the three pillars on which the Zumaia Declaration is based: geology for society, geology as basic science and heritage.

Some of the places recognized in Elhuyar magazine: