The human population that lived in southern China between 14,500 and 11,500 years ago has been called “Red Orein Deer”. In the sites of Maludong and Longlin, fossils of human skulls were found that, according to PLoS ONE magazine, were not modern Homo sapiens. In China, skulls have been found with a mixture of modern and archaic characteristics of Homo sapiens for 11,000 years. Researchers believe their appearance would be the following. Homo sapiens, which remained isolated from those who arrived in later migration periods.

The discovery has placed on the map of human evolution humans who are not clear modern Homo sapiens, who lived in the continental lands, when our direct ancestors were taking the first steps of the transition from hunter-gatherer to agriculture.

The anthropologist of the UPV-EHU, Alvaro Arrizabalaga, has shown himself interested and prudent in the discovery: “It is well edited and the number of fossils is good, but we still have to check it, they have to find more fossils with these anatomical characteristics and show that they are not pathological, that the discovery is left to settle and that the rest of research groups and centers say”. According to Arrizabalaga, the phylogenetic of the genus Homo is a complicated and delicate field, so an article is insufficient. “Give the first blow,” he says, “but then you have to wait for those fossils to consolidate in the record for years.”

In any case, he believes that the discovery reproposes the polygenetic theory of phylogeny, that is, that modern man is not of a single genetic origin, but is as diverse as the result of the lines developed at the local level and of the hybridizations that occurred. “Among the Chinese anthropologists it has always been widespread that the current Chinese do not belong to the direct line of the man of Cro-Magnon, but belong to an alternative pathway,” recalls Arrizabalaga. “It is almost a legend, although a few years ago a very extensive sampling and study of Chinese DNA have proven that they are of the same origin.”

Hidden in the genes of modern man 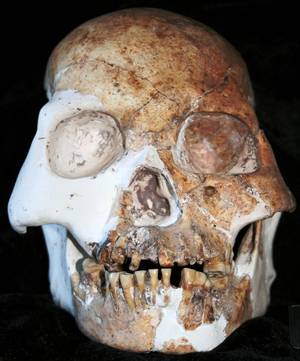 One of the four fossil skulls Ed. Darren Curnoe

A DNA study of red deer caverns has not been possible, so it cannot be known if they have left a mark on the current Chinese population. Arrizabalaga points out that the fact that the fossils have long been found makes this study difficult. Pollution is the greatest risk in the study of DNA and skulls are decades ago: “It is difficult to control the evolution of fossils found long ago and with what other elements have been in contact during the time they have been collected.”

Advances in the study of ancient DNA have recently opened the way to know if the missing human species have left a genetic mark in our country. In fact, the most outstanding discoveries are those of 2010. It was then that it was announced and proved that the Neanderthals have made a “small contribution” to the population of Eurasia, and the genetic results of 40,000 years of fossil found in the Siberian cave of Denisova were also published. It was not Homo sapiens or Homo neanderthalensis, and the current inhabitants of Melanesia retain in their genes remains of this population. Unlike the genetic contribution of the Neanderthal, “there is a lot of controversy with the Denisova fossil”, says Arrizabalaga, “precisely because the identification was made only with DNA, there was only a small fossil, it was a very young grain and the fossil no longer exists, since everything had to be reduced to perform this analysis”.

Arrizabalaga takes as its starting point the results of the DNA analyses and the discoveries that have been made in Asia in a few years, the man of Flores, the man of Denisova and the latter, and not those of goal: “We have to let time work and filter, and be clear that these kinds of findings are very interesting for those who study phylogeny and evolution, but they do not affect from the point of view of our origin if they do not leave their genetic signs in the current population.”