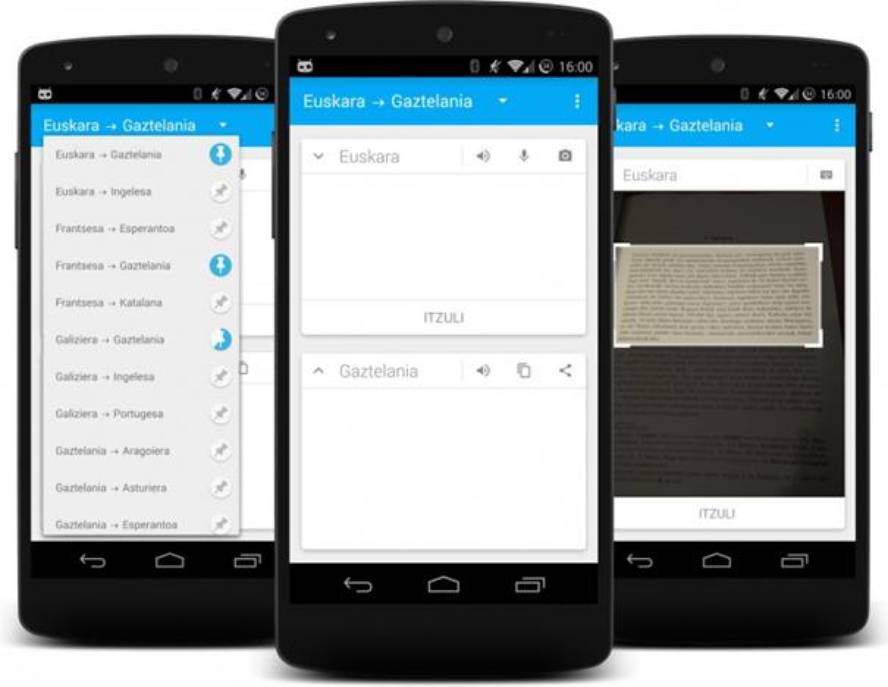 UPV/EHU IXA Group researcher Mikel Artetxe has created an automatic translator for android called Mitzuli. The application is able to translate texts, audios and images in more than 50 translation addresses. It is capable of working both on and off the network and is free software. Available free on Google Play.

In addition to understanding written texts, Mitzuli is able to return to the mobile what he says of voice, as well as the images taken through the camera. For example, if we want to return what you put on a poster, menu or newspaper, just take a photo with your mobile. You can also translate in writing and by voice, as well as know how to pronounce it.

Artetxe announces that it will have more languages. And, in addition to it, anyone trained to do so can improve the application or adapt to their needs, since it is free software.

According to Artetxe on Mitzuli’s website, “what makes special mention of Mitzuli is that it is based on other wonderful projects to offer its fundamental functionality.” And “for a small project like Mitzuli it would be totally unthinkable to build from scratch an automatic translator with minimal quality,” says Artetxe. “Machine translation is an open, extremely difficult problem, where there is a huge community working.”

Through the Apertium platform, Mitzuli performs virtually all translations, including the translation of Basque into Spanish. To translate from Spanish to Basque, use Matxin, the automatic translator developed by IXA in collaboration with Elhuyar. It uses Tesseract, OpenCV and Leptonic for the knowledge of the characters of the images taken by the camera. “This amazing technology has been made available to everyone and we have put it together in a simple application to reach the public,” says Artetxe.

As for the quality of the translations, the differences are significant according to the language. For example, translating from Spanish into Basque is much more difficult than returning from Spanish to Catalan, because the distance between both languages is much greater. “We know that automatic translators are far from perfect, but they can be very useful,” explains Artetxe.

As a personal summer project, Artetxe has developed the app for two years, “in my case, when I had time and without any pressure.” And along the way he has received the support of Elhuyar: “Elhuyar has helped me a lot in locations, server management and communication, among other things,” says Artetxe. And he is very happy because he is being much more echoed than he expected. “It’s free and it’s not about doing a business with this, but we’d like to reach people because we think it can be useful.”