Being a woman when she becomes ill

Medicalization refers to the consideration of normal episodes of life as diseases and their diagnosis, prevention or treatment as such. Although it also affects men, in women this trend is even more pronounced. It has serious consequences and not only in people suffering from medicalization. The prestigious medical journal British Medical Journal published eleven years ago an article entitled: "Selling sickness: the pharmaceutical industry and disease mongering". The authors are two doctors and one journalist and the first sentence is very clear: "You can get a lot of money from healthy people who think they're sick."

Subsequently, the same magazine published a list of non-diseases, completed with the contributions of the readers. Aging, work, boredom, dark circles, ignorance, baldness, childbirth, dissatisfaction, cellulite, anxiety about penis size, pregnancy and loneliness, among others.

And in recent years several books have been published on the same subject. Thus, a part of society has realized that some of the phenomena involved in living are profitable for some, but there is still much to be done to end the tendency to medicalization.

Rosa Rico, head of the health technology assessment service of the Basque Government, believes this. In her opinion, special attention must be paid to women, who suffer the most from medicalization and the consequences that this entails.

The team of Rico discovered that in the case of osteoporosis there was a pathology of old age, which was normal was considered a disease. "We realized that its effects from the economic point of view were important, since the treatments were not applied to individuals, but to the entire population that was in that interval. They were all treated with specific hormones and/or medications against osteoporosis."

In fact, hormone replacement therapy "was sold as a source of eternal youth," says Rico. "Thanks to this, women would not have a single sign of old age: osteoporosis, wrinkles, if we were not dry... nothing."

In the 1990s, in addition to the pharmaceutical industry and health institutions, the media and society exerted great pressure on the treatment of women, especially in the field of gynecology. "And then the conflict of densitometers arose in Italy. The Minister of Health had to resign on that issue. In fact, the industry provided densitometers to specialists to diagnose possible osteoporosis to women. And they began to use and to know whether or not they had osteoporosis they used the WHO definition. According to this definition, women who had two points below the standard of bone calcification had osteoporosis, so they had to be treated."

In addition, Rico recalled that with hormone therapy, the industry also introduced inhaled calcitonin: "This medicine was used in cases of bone cancer and was very expensive. With its generalization, pharmaceutical spending in the Autonomous Community of the Basque Country grew by 5% in a year." 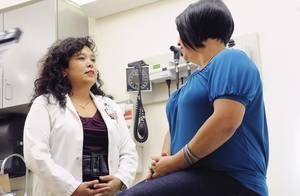 Experts call for special attention to women, who suffer from medicalization and the consequences that this entails. Ed. NIH

This expenditure was so evident that it aroused international attention. As a result, an investigation was conducted in Italy that led to the resignation of the Minister of Health. "In the CAPV we prepared a report that stopped issuing calcitonin."

In the United States, where so much hormone replacement therapy was also given, long-term research was conducted that showed that "the risk of heart attack and breast cancer increased." For Rico, "XX. It is a typical example of late 20th century [medicalization]."

In any case, the tendency to female medicalization does not begin when you reach menopause, since you run the risk of doing it long before. For example, several experts have reported that menstrual alterations are covered with contraceptive methods. On the other hand, pregnant women and women who give birth are often considered sick and subjected to useless recognition and medical treatments. All this implies the loss of responsibility and the ability to decide on one's own health.

Rosa Rico has worked a lot on childbirth in recent years, being one of the authors of the guide to care for normal childbirth. In her opinion, childbirth has been medicalized a lot and she hopes the guide will help prevent it. Thus, the guide collects scientific evidence-based advice for the care of deliveries without special risks, for example, recommends staying calm at home and not going to the hospital during the latent phase of childbirth, since "it has been detected that hospitalization in this phase can pose a risk associated with greater intervention".

The guide also recommends not to perform common practices such as oxytocin administration in the dilation phase or episiotomy. The aim of the guide is to "help professionals who want to make a demedicalization effort," according to Rico.

With the aim of silencing symptoms

Aside from gynecology, another prominent example of medicalization that experts have found in women is mental health. Researcher Carme Valls reports that 85% of the psychodrugs prescribed in Spain are aimed at women. According to Valls, the percentage is very significant, "at most, among women, since cases of anxiety and depression are double that in men."

Two are the main reasons women turn to the doctor: pain and fatigue. Valls believes that, on many occasions, the processes behind these two symptoms are due to the lack of protocols and resources, and that doctors use anxiolytics or antidepressants to cover that gap.

In this sense, in recent years voices demanding attention to fibromyalgia are being strengthened. Valls, in a joint work with other researchers, has picked up a disproportionate tendency to diagnose fibromyalgia in women with pain, especially in our environment. And he gave the following data: In the United States, 2% of women have fibromyalgia, compared to 18% in Spain. The difference is great, to ignore is too big.