Between 2000 and 2004, Asia recorded a significant increase in the mortality rate among adult and young specimens of the vizcaíno bengalo vulture (Gyps bengalensis). As a result, its population was drastically reduced, being in danger of extinction one of the main species of Asian vultures. The responsible for these deaths was a well-known drug: diclofen (from the group of non-steroidal anti-inflammatory drugs). Today, the use of drugs in our society is very common. On the contrary, it is increasingly consumed and its use has increased considerably, especially in recent decades. It is estimated that by 2020, 4.5 billion doses of drugs will be used worldwide, it is estimated that in 2005 a third of the population consumed more than one dose per day, and that by 2020 these consumers are expected to represent more than half of the population [1].

However, drugs are not only human, but are often administered to animals (both in pets and in livestock).

It is about getting beneficial effects on the organism in the taking of drugs, which are the causes (indications) of its use. Unfortunately, they also produce side effects of which pharmacovigilance is responsible. Release, absorption, separation, metabolism and excretion are pharmacokinetic processes that suffer from medicines during your body life. The expulsion of drugs and substances derived from them from the organism is carried out through excretion, mainly by urine and feces, which can be kept partially active.

As is known, matter and energy do not disappear, they are transformed and drugs are no exception. Therefore, once passed through the body, the drugs (and their residues) make their own way… in the environment.

Some examples that come to mind when we think of toxic are pesticides, dioxins, chapote, etc. In recent times, however, we speak of newly designated pollutants, that is, substances unknown or not considered as pollutants. Among them, drugs are the ones that raise the most concern, so organizations such as the World Health Organization, the Environmental Protection Agency and the European Commission have turned the study of the environmental impact of drugs into a priority line of research [2,3].

Different types of drugs and waste have been detected in environmental compartments, mainly in wastewater, surface and underground, also in drinking water! ), also in soils, air and me.

The German Environment Agency collects global information on medicines that have appeared in the environment (https://www.umweltbundesamt.de/documento/database-pharmaceuticals in-the-environment-excel).

In our case, drugs have also been measured in Urdaibai waters and fish, such as antibiotics, antidepressants, etc. [4].

Drugs can bioaccumulate in the environment and extend to the food trophic chain. An example of this is a study in Australia in 2018, in which several drugs were measured in aquatic invertebrates and insect larvae. They estimated to what extent drugs can accumulate in predators that feed on adult insects, and concluded that ornithorrines would have an exposure to antidepressant levels equivalent to half of the doses used in humans [5]. 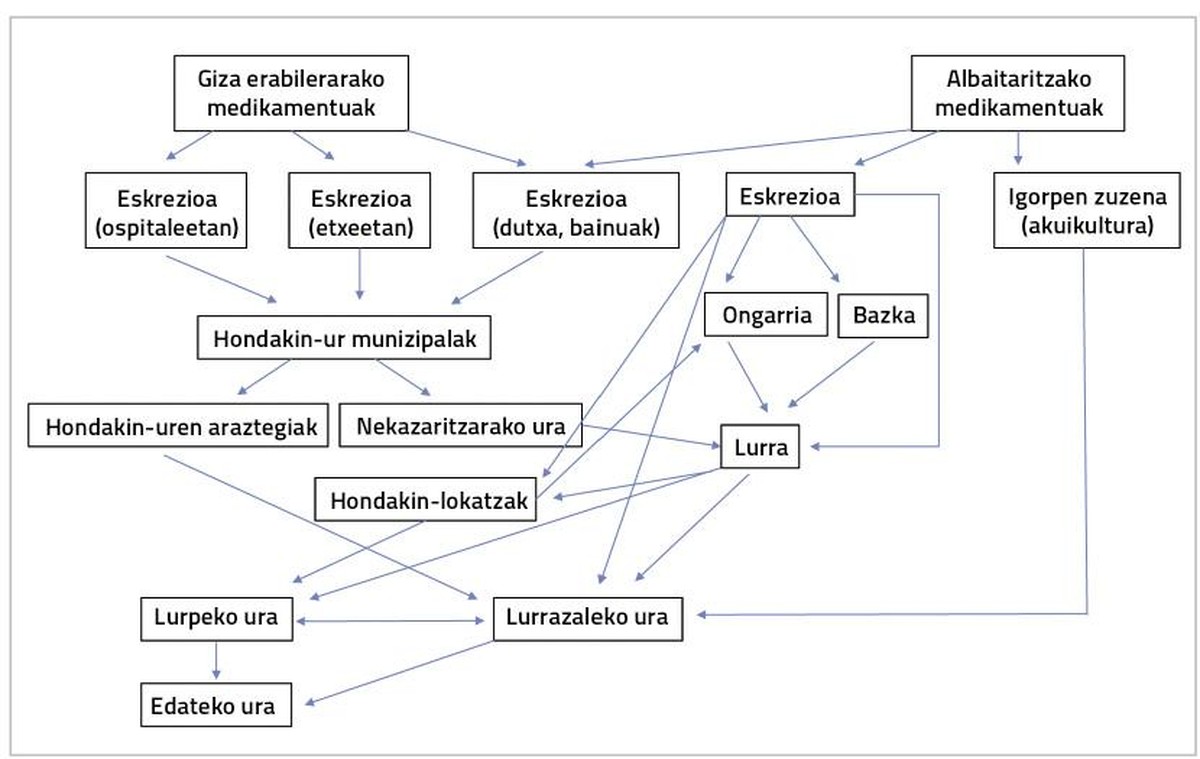 The transmission and transfer of medicines to the environment modified since [3].

How do drugs reach the environment?

As already mentioned, the consumption of drugs and the excretion of metabolites as a consequence of this are important routes of contamination. However, all stages of the drug life cycle can be a gateway to the environment: production, distribution, consumption, waste management [2,3].

It is known that much of the drugs that are sold are not consumed. The undue exclusion of expired or unconsumed drugs is an important way of contamination that can largely be avoided [2,3]. There are several ways to remove medicines: throw them from the toilet or drain, throw them in the trash or use specially created systems. From the environmental point of view, the most appropriate would be the last. There is a worldwide lack of conformity as to how to reject drugs and systems created specifically for their elimination are not available in all countries [6]. European legislation obliges countries to have exclusion systems as of 2004. However, according to a 2013 report, it is estimated that 50% of the drugs are not discarded properly. For example, in France only 6% of sales were returned in 2008 [3]. In Spain, since 2000, there is a system created by the pharmaceutical sector to manage the waste and containers of medicines consumed in the homes: the collection is carried out in the SIGRE points of the pharmacies [7]. The management of waste in hospitals and health centers is organized differently (through private companies).

One of the main access routes to the aquatic environment are wastewater, which can be of urban origin, hospital, industrial, agricultural, livestock [2,3]. EDAR were not designed to remove waste from medicines, so some contaminants are not completely removed. In a study carried out in Galindo (Sestao) several measurements were made in the waters that reached the treatment plant. It was verified that although the water flow of the Galdakao Hospital was 0.56% of the total flow rate, the concentration of several pollutants was 4 to 20% of the average concentration of input [8]. It is remarkable and worrying that 80% of the world's wastewater does not go through wastewater treatment stations [9].

Among the ecological disasters caused by pharmacocontamination, the first documented corresponds to diclofen (a type of non-steroidal anti-inflammatory drug or IEA) [2]. At the beginning of the century, the mortality of adult and young individuals of Gyps bengalensis in Pakistan increased significantly and the population declined sharply. How were vultures contaminated? They ate the corpses of the reses previously treated with this IEA, which caused a serious renal error and death [10]. This species was included in the List of Threatened Species of Extinction in 2004, in the category of Serious Risk, which continues today [11].

Among the most common examples are the reproductive problems of fish exposed to ethinylestradiol (estrogen) [3]. The ibermectin used in livestock (antiparasitic) is excreted in the feces and it has been shown that it can cause the death of invertebrates that undergo it long ago [3]. However, it has recently caused slaughter in Doñana [12].

In the case of antibiotics, due to discharges in the production plants, antibiotic-resistant bacteria have been detected in the environment [3].

In general, chronic exposure to contaminants or mixtures of contaminants is more worrying than the high concentration that can have a certain contaminant. The data of research carried out in humans cannot always be extrapolated to other living beings, and a greater number of ecotoxicological studies are necessary to analyze the harmful effects of drugs in nature [2,3].

Few investigations have been carried out on the possible damages that residues of drugs can cause in the human being. The pollution routes are mainly related to the consumption of water, vegetables, tubers, meats, fish and dairy products. Although contaminant levels are generally low, as in the previous case, concern lies in the possible consequences of long-term exposure to contaminants and mixtures [2,3].

As mentioned above, the contamination of antibiotics generates a great concern for its ability to generate resistant strains. According to the United Nations, this is currently one of the biggest public health problems in the world [14]. In this sense, the fight against resistances is based on the unique concept of health (one health), which integrates human, animal and natural health into one health.

Number of drugs detected in surface, underground and drinking water, modified from [13].

What can we do to reduce pharmacocontamination?

Various measures have been proposed to address the problem. The European Commission defined, in 2019, among others [15]:

- Promote the rational use of medicines and avoid excessive consumption.

- Manufacture of more “green” drugs that can be degraded more easily in the environment or in treatment plants.

- To raise awareness to patients and health professionals of the proper elimination of expired or unconsumed drugs.

- Optimization of the purification techniques.

- Use specific treatments for contaminants in important emission points such as hospital wastewater.

Like all pollution on our planet, pharmacocontamination is a global problem. Not only because of the worldwide consumption of drugs, but because emissions to the environment can occur in all territories (stages of the life cycle of drugs), but because the effects of pharmacocontamination can be globalized, as the resistance of antibiotics. Otherwise, what influence can the disappearance of some species have?

The investigation of the possible environmental effects of drugs is fundamental in order to implement adequate measures to avoid or reduce as much as possible such impact. For this purpose, the first step is awareness. For all this, we have recently launched in Vitoria-Gasteiz an integrative strategy called the Basque Sustainable Pharmacy, which has as strategic lines the creation of an inter-institutional agreement that integrates all the agents, the awareness of all the agents involved in the complex cycle of life of the drugs, the investigation of the situation in the near environment and the dissemination of contributions to the scientific community.

Work presented at the CAF-Elhuyar Awards.