The situation of the dairy sector in the Autonomous Community of the Basque Country has changed substantially since it was incorporated into the European Union in 1986, since the system of single-payment grants has meant the transfer of milk production to larger farms and the elimination of smaller ones (Basque Government, 2006). The concentration and genetic improvement of production has led to very high levels of production, with a significant increase in production needs. Currently, to maintain these high levels of production it is necessary to obtain raw materials produced abroad, mainly proteins. In fact, the food produced in the farms does not cover the feeding needs of the cows, so the traditional concentrated production system has generated a great dependence on external raw materials, up to 60% of the expenses of the farms in animal feed. Faced with this situation it is essential to work in this field in order to reduce costs and allocate sustainable equipment.

In the composition of feed used in the daily feed of animals soy is used as the main source of protein, due to its high protein content (44-48% protein; FEDNA boards, 2016). The production and market of this raw material depends mainly on the United States, modifying prices at any time. Europe, on the other hand, needs this source of protein, so it has a great dependence on this market. This link has a tremendous impact on milk production costs, seriously affecting the economic benefits of farms.

On the other hand, it should be noted that almost 100% of soy from abroad is transgenic, which generates a great concern for the consumer, generates doubts about the quality of the product and causes some rejection to the milk produced. To alleviate this dependence with the United States, great efforts are being made to obtain the protein needed by animals through native crops. In this sense, among other attempts, various studies have been carried out on rapeseed, specifically on cold-pressed rapeseed turto. Rape is an interesting option because it can be produced in the Autonomous Community of the Basque Country and has important nutritional values for animal feed.

Rape taños generated by a single mechanical process have nothing to do with rapeseed flour that we can find in the current market (7.2% fat and 31.2% protein; FEDNA tables, 2016). This is because the flour is obtained by mechanical and chemical processes, so it loses more components and also undergoes high temperatures, thus losing the quality of the protein.

Cold pressed rapeseed seeds do not extract fat at the same level, so the product obtained, the colza turo, contains large amounts of fat and protein (28.3% fat and 22.4% protein) and, moreover, not being subjected to high temperatures, the protein maintains its own characteristics. Another characteristic is that the profile of the fatty acids that the product contains is unsaturated; as indicated by several studies carried out (Amores et al, 2014, Najera et al, 2017), this can modify the profile of the fatty acids of milk and cheese, making it more unsaturated. Foods rich in saturated fats or fats contribute to raising blood cholesterol levels, so unsaturated fats are healthier for humans (Mensink et al, 2003).

Studies to date indicate that this source of protein produced maintains the level of production and quality of milk and cheese such as soy (Amores, 2014), but unlike soy, its profile of fatty acids in milk is more unsaturated. In order to complete this information, we analyzed the influence of the use of rapeseed dyes on the feeding of milk cows, the taste of milk and its sensory characteristics (color, smell, texture), since consumer perception directly influences the acceptance of the product.

Where and how have we tried it? 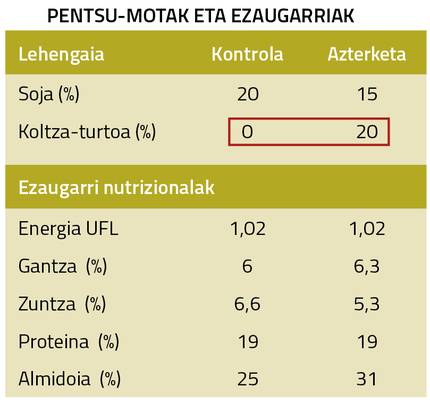 The study was developed within a project of the Neiker research center, at the Fraisoro Agricultural School, for 10 weeks. The trial was conducted with 16 cows, ten of Swiss breed and six of Holstein breed. The cows were divided into four groups, according to their race and feeding.

To feed they were given fodder or feed: fodder was equal for everyone, while feed was different for the two groups of the same race. Feed was called control and analysis (Table 1). The control had as main source of protein soy (20%), and had no rapeseed. On the other hand, the protein source of the study was colza taño pressed in cold (20%) and soy (15%). However, both feeds had the same nutritional characteristics (19% protein, 1.02% energy and 6% fat). In the study I think, the use of rapeseed brass allowed to reduce the use of soy, which meant a decrease of 9.6% in the feed analysis regarding control.

Figure . Summary of the essay.

After 10 weeks feeding the cows with two different feed, for the tasting, 5 liters of milk were collected from each of the cows participating in the test and packaged in four marmities, well identified by race and feed (Figure 1). The milk was transferred to the Leartiker Center (Food Technology Center, Markina-Xemein) for tasting tests. 60 untrained men and women aged 18 to 65 participated in these sessions and three tests were conducted:

For the last two tests, the tasters filled out a questionnaire about a milk sample from each group. In the questionnaire, participants assessed the color, taste, smell and texture of the milk being studied and its overall quality.

What have consumers said?

Figure . Results of the responses received in the triangular test.

According to these results, since the number of correct answers was higher than 27, it can be concluded that cold-pressed rapeseed turt affects the sensory characteristics of milk and that the consumer perceives these changes.

In the affective and quality tests all the milks had a positive assessment. As for the characteristics of milk, the aspect, smell and texture assessments were very similar for the milk of the four groups, highlighting the biggest difference between the taste data: Unlike milk produced by cows of the Holstein breed, among those of the Swiss breed, consumers said they were more eager for the milk of the group fed with the turnip (Figure 3).

In general, considering that the group of tasters was not expert, there were no significant differences in milk quality and consumers did not reject any milk.

What can we deduce from all this?

After analyzing the taste of milk and other sensory characteristics, we can conclude that rapeseed crops produced in our territory can be a good option to meet the protein needs of animals, when the seed is cold pressed. When rapeseed taño is one of the components of feed for the feeding of cows, the level of production and quality of the produced product is maintained, in addition to a more unsaturated profile of the fatty acids of milk. However, in the taste of milk there are no changes that can be rejected by the consumer, so it is also valued positively in the last step of the marketing chain.

Therefore, we can conclude that this source of protein is an interesting option for both baserritarras and consumers, since baserritarras manage to reduce the cost of feed and consumers have on the market a healthier product that maintains the same sensory characteristics.

This work has been possible thanks to a grant from the Basque Government and the resources and support of the Neiker research centre. In this work R. Atxaerandio, R. Ruiz, N. Mandaluniz and A. Garcia-Rodríguez, my thanks to everyone.