Yes, in our rivers and wetlands they live supported. Unfortunately, nowadays, the most abundant and widespread species are those of foreign species, while the native species are threatened. After years of research in the territories of Bizkaia and Araba, we will try to reveal some secrets about this unknown world. 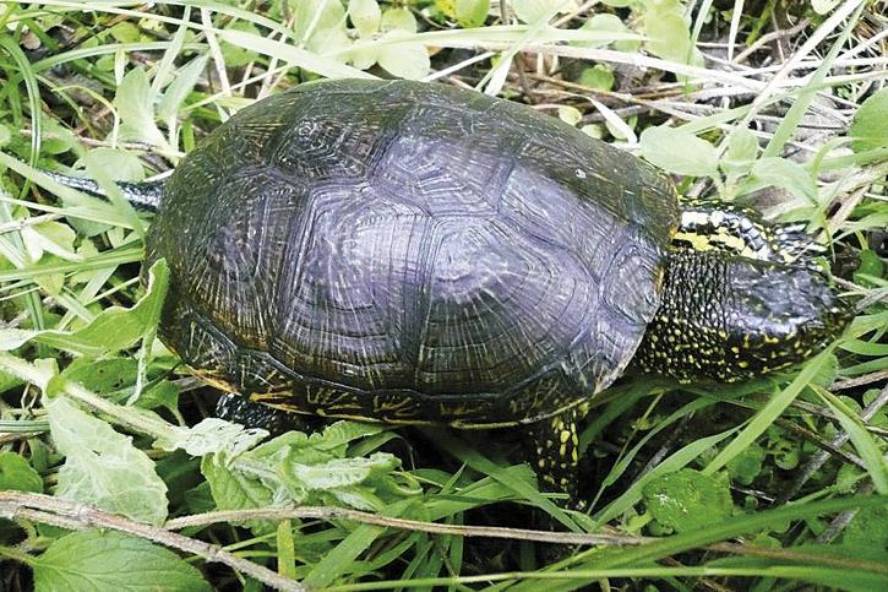 In 2001, after carrying out the herpetological inventory of the municipality of Getxo and the concern for the growing number of foreign galapagos in the wetland of Bolue, with the support of the Department of Environment of the City of Getxo, S.O.S. The Galapagos project begins. Buenetxe, I. With the help of Zugadi, with the intention of removing them. Although in the Iberian Peninsula it was known that the foreign tortoise is invasive, no one dared to face the problem until then.

Bolu's was therefore a pioneering initiative at the state level, which initially kept the animals captured in a controlled enclosure next to the wetland. Soon he was small and had to move to the Wildlife Restoration Center of Bizkaia.

Only in the first year were captured more than 150 strange Galapagos, 17 corrupt Galapagos ( Mauremys leprose) and in 2003, the first number of the European tortoise ( Emys orbicularis). These two species are native to the Autonomous Community of the Basque Country and are classified in the Catalogue of Threatened Species with the characteristic "Vulnerable", so they were released into the wetland after identification. In addition, the Rehabilitation Center made the decision to detach specimens from different origins of these species in the Bolue wetland, in order to strengthen their population. This happened in the summer of 2004, while the first newborn specimens of the European tortoise were detected, the first reproduction data of the species in the CAPV.

Shortly after starting to work in the Bolue wetland, studies were carried out in specific places in the two provinces mentioned, and in 2007 in Bizkaia and in 2010 in Alava we began to explore gradually the entire territory with a double objective: on the one hand, to search for native species and on the other, to remove the Galapagos from strange species of natural spaces. 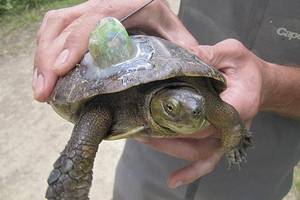 Galapagos are fleeting animals that can easily go unnoticed. Therefore, when we arrive at a new place, a sunny day, we approach the wetland with all silence and slow movements, and with the help of the binoculars or the telescope, we seek first those supported that may be in the sun.

Then we cheat. They are usually of different models: in the form of platform and they were called "Bolue traps". The first ones are similar to those used for the capture of crabs or eels, that is, the openings in the form of inverted cone allow the entrance of the tortoise but avoid the exit; we also supply them with float so that the apologists breathe, and to attract them put as bait fish or chicken liver. The Bolue trap, for its part, takes advantage of the need for the supporters to sunbathe; when they climb on the trap, they are activated from the outside and are trapped within a network that surrounds it, whose name comes from the wetland of Bolue, where it was invented. Since then it has been used in various natural spaces of the state to capture strange galapagos.

We fill a tab for each of the captured Galapagos, where sex, measurements (shell dimensions, weight, etc.) and access details (date, place, etc.) are indicated. Then, depending on the species, we act as follows: we move the specimens of exotic species to the Wildlife Restoration Centers of the corresponding Provincial Council, and identify the specimens of the native species by microchips and/or wilts at the edges of the shell, leaving them loose in the same place of capture. Some of the Galapagos native species are also joined by a transmitter in the shell to, through the technology called radiotracking, follow the movements of these animals and obtain information about habitat use.

Finally, whenever we move from one wetland to another, we properly disinfect the instruments that have been in contact with water to prevent the transport of zebra mussels or other pathogens.

Result and future of 10 years of work

Traps to capture galapagos: to the left, in the form of platform; above, diagram of the operation of the Bolue trap. Ed. © BOLUE Environmental Studies

In total we have been able to take from our natural spaces more than 500 strange Galapagos, most of them from Bizkaia, where we have acted with greater intensity. They can be found in any river, reservoir, well or wetland, especially in those closest to urban cores. In addition, we have verified that these Galapagos strangers are able to reproduce also in our country, although for the moment they are only isolated events. Unfortunately, there are still many free specimens in our territory, so there is much work to do if we want to advance the invasion.

As for the native Galapagos species, the current situation is not relaxing: isolated specimens have been found scattered throughout the territory, but few populations, some of them with very few specimens. We know that some of these animals came from some other geographical area, but the older ones tell us that the turtles were more widespread in our territory in the past. The drastic changes in the environment caused most of the populations to disappear and that the silent capture would undoubtedly have been very harmful. On the other hand, the Galapagos strangers that have proliferated lately have also not benefited our Galapagos. It is therefore very important to find and protect those who remain.

How have foreign Galapagos reached our wetlands and why do we take them out?

You will all have seen small green Galapagos sold in animal stores, surely some of them have had at home. Many of these Galapagos die still small, while others continue to grow and live for years. Unfortunately, people in the end get bored and, out of good intention and ignorance, release them into wetlands, that is, abandon them. They are robust animals, able to survive in freedom without problems and to reproduce. Thus, the strange tortoise has become one of the most harmful invasive animals in the world today, according to the International Organization for the Conservation of Nature.

In the 80's and 90's the purchase of the Florida turtle was extended ( Trachemys scripta elegans) and the abandonment of certain animals in natural means. The most serious damages in the ecosystems that cause the strange Galapagos are the large restaurants, of wide diet, that affect amphibians, invertebrates, small vertebrates and plants, in addition to competing directly with the threatened indigenous Galapagos, that take away the best places to feed, sunbathe and nest, as well as health problems being carriers of dangerous pathogens like Salmonella. 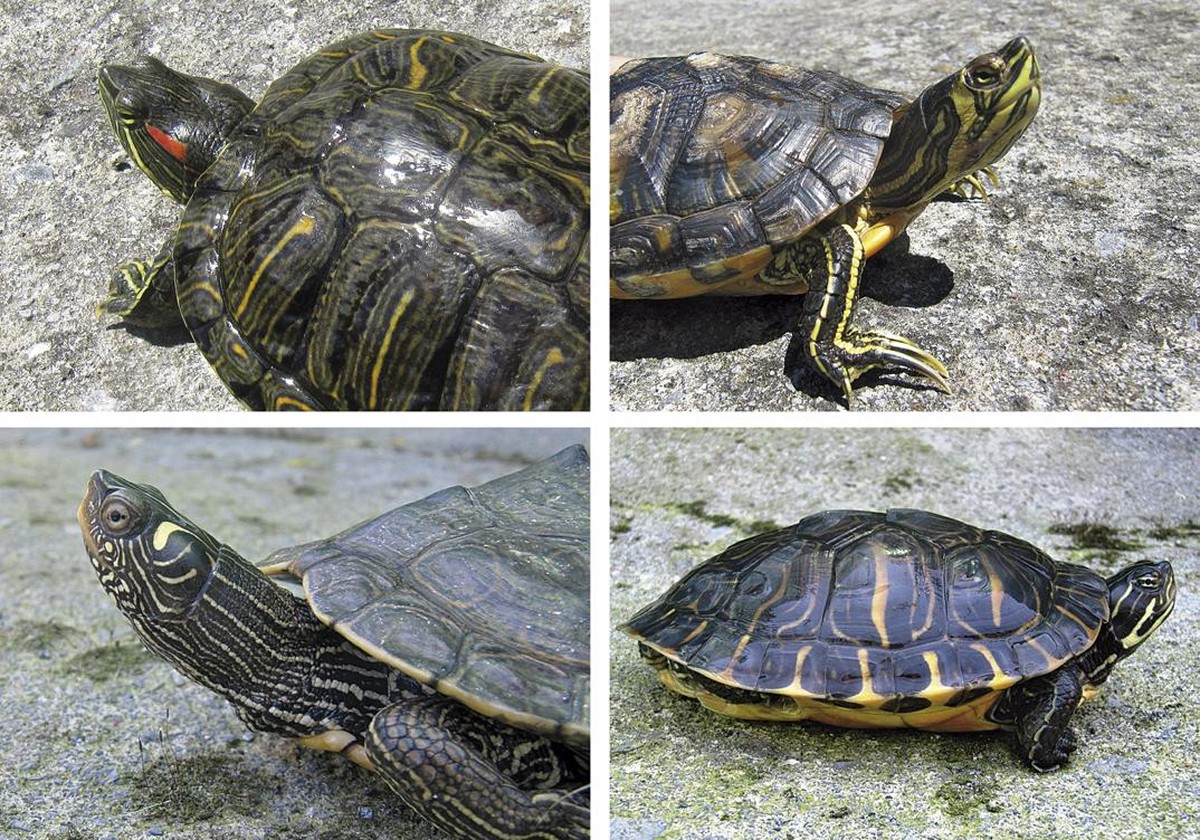 Aware of this problem, in 1997 the import of this subspecies was prohibited in the European Union. This measure has been very deficient, since the sale of foreign Galapagos (to be domestic animals) has increased in recent years and new subspecies and species (Trachemys scripta scripta, Graptemys pseudogeographica, Pseudemys sp. etc) have been marketed. Also, although awareness work has been carried out and carried out, people continue to leave the Galapagos in natural spaces, which allows to find specimens of different species in their environment.

Now, in December 2011, the Royal Decree regulating the Spanish catalogue and list of invasive alien species was published, in which the species Trachemys scripta is considered invasive, while all other exotic species mentioned are only admitted as potential invasive. This means that from 2013 the Trachemys script will no longer be marketed in the state's animal stores, while the rest will. We were hopeful that this Decree would be more rigorous in regard to the consideration of domestic animals of strange forages, but the conviction that the previous situation will not involve great differences, without a deep work of awareness.

For all this, what to do in case of finding any apoardo or not caring about the domestic support? Take it to the Nearby Wildlife Restoration Center (Bizkaia, Gorliz, Araba, Martioda and Gipuzkoa, Igeldo) or call the Forest Nursery of the corresponding Provincial Council. It depends on everyone!

These works have been financed by the Municipalities of Getxo, Vitoria-Gasteiz and the Provincial Councils of Bizkaia and Araba.

Two native or native species inhabit our territory:
· European pond turtle ( Emys orbicularis), dark freshwater turtle with a shell up to 20 cm. Its distribution area from Portugal to the Caucasus is known in the CAPV by a single population, the Bolue wetland (Getxo, Bizkaia).
· The corrante tortoise ( Mauremys leprose) can be larger than the previous one and is olive. It is only found in the world, in the Iberian Peninsula and in some fragments of northern Africa and southern France. Isolated populations are known in the ACBC, in Bizkaia and Araba.
Basic facts about Galapagos biology:
· They are reptiles of order Chelonia.
· Like other turtles, they have a scaly shell that provides passive protection.
· Those living in fresh water also have interdigital membranes that help them swim, that is, patchy legs.
· They have lung breathing so they have to go regularly to the surface of the water to breathe.
· The poiquiloterms, that is, are of cold blood, so they have the habit of being exposed to the sun in stones, branches or floating trunks, in order to accelerate the metabolism, while in winter, when the temperature of the water drops below the 10ºC, enter the lethargy buried under water or on the shore.
· They are oviparous that lay 8 to 18 eggs in nests excavated in the soil.