Rosetta was the key stone for decoding hieroglyphs. Well, the European Space Agency gave its name to the mission to unravel the mystery of comets: Mission Rosetta. Specifically, the Rosetta followed comet 67 P/Churyumov-Gerasimen, leaving a module on its surface: Philae. The ship finished its trip in 2004 on September 30, and the analysis of all the collected data will last a long time. However, thanks to the results published so far, some beliefs about comets have already been confirmed and others have been cancelled.

Comet activity increased in the time closest to the Sun. Ed. ESA/Rosetta/MPS for OSIRIS Team MPS/UPD/LAM/IAA/SSO/INTA/UPM/DASP/IDA

1. Comets can have two cores

The appearance of comet 67P surprised: according to the images and against what they expected, comet was not a kind of mononucleo rock, but an asymmetric body formed by two cores. They looked like a rubber duck and so have imagined since.

The axis of rotation of the comet is inclined 52º regarding the ecliptic, so it has extreme seasons. Due to its appearance, gravity varies a lot from place to place due to centrifugal force. Thus, in some areas it can be three times smaller than the terrestrial. The escape speed is approximately 0.9 m/s.

3. Born at the beginning of the Solar System

Astronomers have believed for many years that comets were formed from the union of remains of matter, when the solar system was forming. Well, according to Rosetta, at least, comet 67P emerged like this. And it is very possible that others have also done so.

In fact, to explain the aspect of 67P, astronomers had two hypotheses: that some parts were easier to erode than others, so their appearance was due to erosion, or that it was formed by connecting two parts. The data compiled by Rosetta support this last hypothesis. For example, ESA has emphasized that the body and mind have different characteristics, which shows that it is the sum of both comets.

4º Not a dirty snow ball

It has been customary for comets to be represented as a dirty snowball. Rosetta denies this image. In fact, on the surface of the comet they have found very little ice, more like an asteroid than a snowball. 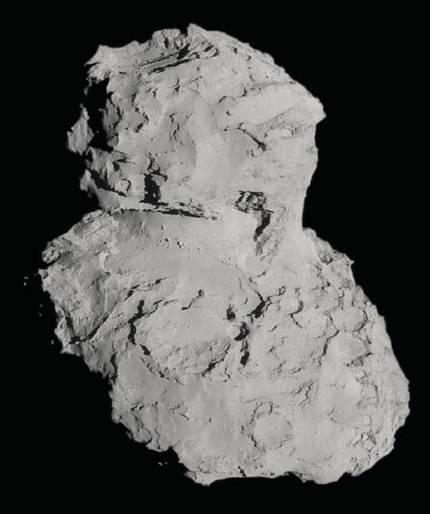 However, some believed that the ice could be under the skin. And yes, it has it, but almost everything is mixed with other materials, so it does not appear in the form of ice. In addition, it has been proven that some areas are practically dry. Thus, in any case, comet 67P is a ball of dust.

While they have found less clean ice than expected, they have shown that ice covers a cycle. In the evening, the ice at low depth is sublimated due to the high temperatures suffered during the day. Once the surface is reached, it freezes forming an ice layer. But this layer is once again sublimated by the Sun. Therefore, as seen in comet 67P, not much ice is needed for a comet to have activity.

6th Comets are not the origin of Earth’s water

There was another unconfirmed hypothesis, that comets brought water to Earth. When it was discovered that many asteroids also had water, the hypothesis lost strength, even more when it was shown that asteroid ice and oceans had the same isotope composition. In addition, when they had the opportunity to analyze the data of comets, they realized that they had another composition.

However, when they analyzed the isotopes of comet 350P/Hartley 2, it was surprising that the percentage of deuterium (a hydrogen isotope) was similar to that of the terrestrial oceans. Comet 350P is of short period and so is also 67P. The question arose immediately: Will it also have an isotope composition similar to that of the oceans? The answer was Rosetta's ROSINA tool: no. Therefore, the most conclusive hypothesis today is that the water of the Earth is due to asteroids.

7. The sun makes it aggressive

One of the main objectives of the Rosetta mission has been to follow the changes that the comet experiences as it approaches and departs from the Sun. When the Rosetta probe reached the comet in 2014, it was measured that the comet emitted 300 g of water vapor a day. As it approached the Sun, the activity was increasing and in August 2015, when it was closer to the Sun, the perihelion, emitted 300 kg of water vapor per second and a ton of dust. It is estimated that every time it passes through the perihelion it loses between 3 and 5 million tons. Some of the bass are especially violent and emit dust and rock fragments. 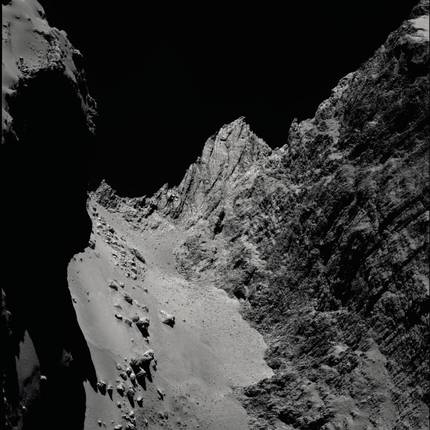 Near environment where the two parts of the comet are joined. Ed. ESA/Rosetta/MPS for OSIRIS Team MPS/UPD/LAM/IAA/SSO/INTA/UPM/DASP/IDA

Among the most unique structures observed on the surface of the comet are circular graves. In some areas they are more abundant and deep than in others. As they have explained, carbon monoxides and frozen carbon dioxide from the inside of the comet are produced by sublimation, as the surface cover collapses. Then, the ice that has remained in the sun also sublimates and carries dust. In this way, the comet loses most of the gases and powders of the nucleus.

In addition to sinks, dunes, canyons... the comet has a wide variety of structures. The ESA have distinguished 20 zones and have given them the name of the Egyptian gods. However, in general, these areas are of two types: some show the solid surface of the comet, are rocky and have large cracks and ravines, others much softer and are formed by accumulated dust. The place where the Philae module was to land was those soft, while the rocky and rough was chosen for Rosetta's greeting.

10. It has organic molecules

The Rosetta mission has not revealed whether life on Earth comes from comets, but the 67P comet contains numerous organic compounds. Among others, they highlight the amino acid glycine, also detecting glycoaldehyde, etanodiol and acetone. In addition, other substances have been found that are the basis of life, such as ethanol and phosphorus.

That is, molecular oxygen has also been detected in comet 97P. Astrophysicists did not expect it because it is very reactive, but the measurements of the mass spectrometer (behind water, carbon monoxide, and carbon dioxide) have been shown to be the fourth most abundant component of the gases surrounding the comet.