Private companies have just launched a new competition in space. Some of them are working intensely with NASA and seem to have a promising future. Others, for their part, try to lay the foundation for this new business on their own. 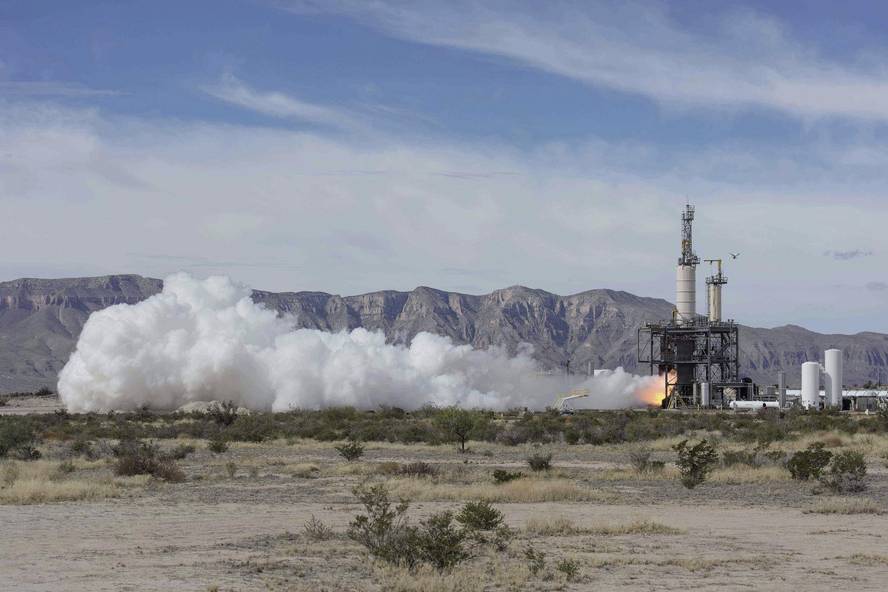 If you can ever drive on SH 54 in Texas, we may see a fireball in the sky. Quiet, it will not be a hallucination or a meteorite. 8 kilometers from this road, the founder of the prestigious Amazon store, Jeff Bezos, has launched a new business that will probably have its origin in this sky light. There is a space shooting area, the West Texas Launch Site by Blue Origin. 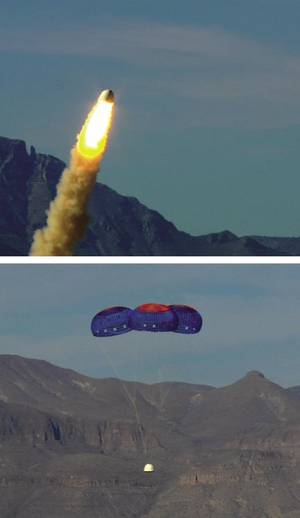 Launch test Blue Origin. For the crew launched a full-scale capsule at the suborbital altitude (above) and successfully recovered it (below). Ed. Blue Origin

On 24 August 2011 a rocket launched from there explodes in the sky. The accident was not made public until journalist Andy Pasztor published his investigation in the Wall Street Journal. For a few days, the explosion was hidden from the attentive gaze of public opinion. Until the news appeared in the media, the company did not explain by note the circumstances of the accident.

The Blue Origin logo features two turtles and a motto for stargazing: “Gradatim Ferociter”; little by little with courage. That is the essence of the working philosophy underlying this initiative. They act slowly, without producing much noise. Of course they have to report the launches to the agencies in charge of the control of the aviation, but they develop their activity far from the press. “Unfortunately, Blue Original does not offer media interviews at this time,” a company spokesman responded to Elhuyar’s request.

Technically they want to develop both firing and vertical landing rockets. They want to do this by increasing reliability and significantly reducing costs. On this road a rocket called New Shepard is developing, capable of taking three people to a suborbital flight. 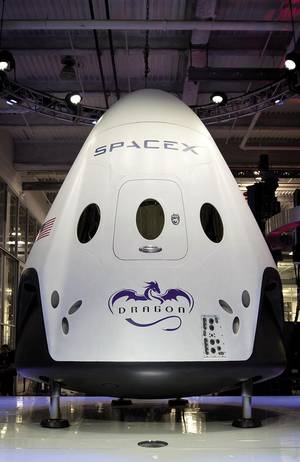 SpaceX is a company with a policy very contrary to the media. Behind him is another dreamer who started in the internet business: Founder of the PayPal payment system Elon M.

Like the introductory events used to launch next-generation mobile phones and operating systems, in May 2014 Muskiz uncovered his latest spacecraft: Dragon V2, (Dragon, second version). It was only a prototype, but the first version of the Dragon showed much value. This dragon was the first private ship to be tied to the ISS International Space Station and managed to carry the cargo to it. On this occasion, the first dragon hung over the heads of the participants in the presentation ceremony.

Under the applause of the attendees, a video showed the operation of the new capsule. It is a ship capable of carrying seven astronauts, but its main novelty lies in the grounding method: the boat will land by four backbeds, without using traditional parachutes so far. “This is how the XXI must land. A ship of the twentieth century”, Muskiz pointed out again among applause. 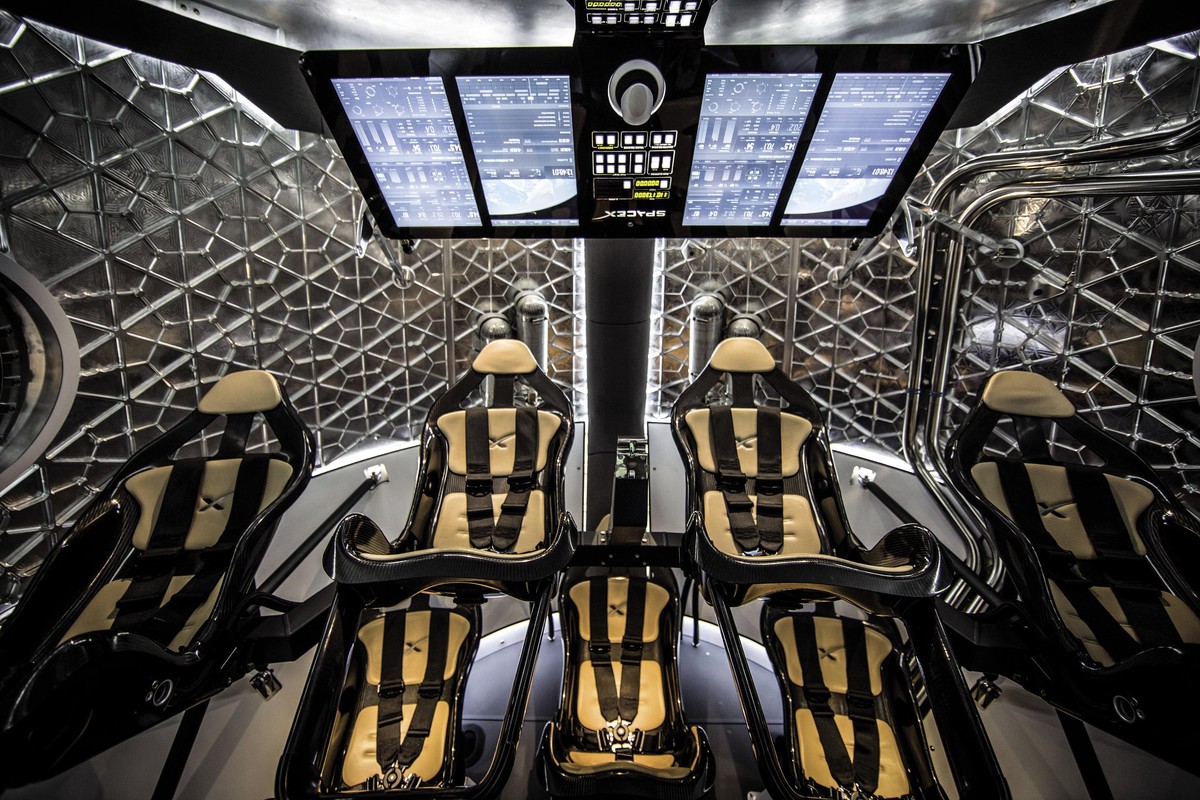 Inside the Dragon V2. He will be able to carry seven astronauts. Its main novelty is the landing method, which uses backbeds to land, not a parachute. Ed. SpaceX

The Dragon capsule is not, however, the only vessel capable of transporting the load to the ISS. In September 2013, the Cygnus capsule built by Orbital Sciences Corporation supplied the space station for the first time, with a total of 700 kilos of supply.

Both SpaceX and Orbital Sciences have signed an agreement with NASA to supply ISS. The first will make twelve trips and the second eight. So far, therefore, the collaboration between NASA and private companies has been based on supply trips, but the next step will be the transport of astronauts within the Commercial Crew Program. 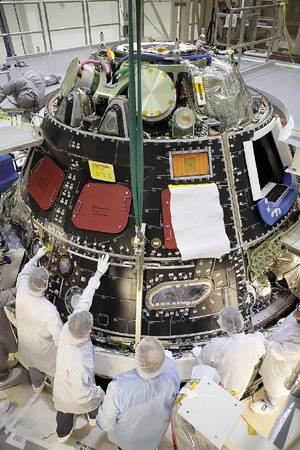 Capsule of the astronauts of the Orion spacecraft. This will be NASA's new spacecraft to bring astronauts into space, although design and manufacturing are run by Lockheed Martin. NASA/Dimitri Gerondidakis

This new competition has more participants. Boeing, for example, has in his hands a capsule called CST-100, capable of transporting seven people. For its part, the Sierra Nevada Corporation is developing a ship called Dream Chaser, which closely resembles existing space ferries. And NASA itself is developing a capsule called Orion, although its design and manufacture are in the hands of Lockheed Martin.

However, it is difficult to understand why NASA keeps its project going. “This schizophrenic situation starts with the tensions between the White House and the U.S. Congress,” says astronautical astrophysicist Daniel Marin. In 2010 the Obama administration abandoned the Constellation program. The aim of this initiative was to return to the Moon and to do so it envisaged the construction of the rocket Ares V and the ship Orion. “Obama opted for private initiative to transport cargo and astronauts to the ISS space station,” explains Marín. However, the congress was opposed and ordered to build a smaller version of the Ares V rocket called Orion and SLS.

All these moves are based on the US administration's decision to abandon space ferries. In addition, Challenger (1986) and Columbia (2003) ferry accidents caused safety concerns.

Instead of relying on NASA for all the technological development of the missions, the US authorities opened their doors to private companies in the confidence that the competition between them encompassed the exploration of space. SpaceX, for example, has performed the first used rocket recovery and reuse tests, and is designed for repeated reuse of the Dragon V2 capsule.

Moving cargo and astronauts to the ISS space station is not the only option for those who want to participate in the new space business. The exploitation of tourism and natural resources are two of the business areas that are perceived in the future.

Human beings have long imagined our future in space and these representations are full of futuristic hotels built both in orbit and on other planets. However, the road so far has been much smaller. While in the ISS space station they have been the first “space tourists”, so far they have been punctual and limited trips. The following steps will be aimed at conducting suborbital flights, but it seems that these trips are not limited to tourism. Spacecraft are used to travel fast from one place to another, to shorten the long flights carried out by current aircraft from one continent to another.

As for resource exploitation, Planetary Resources wants to launch asteroid mining. It is about getting a few metals on earth and abundant in asteroids, mainly ruthenium, rhodium, palladium, osmium, iridium and platinum. The company's first initiative is to launch a low-cost space telescope to analyze and select the most viable asteroids.

Towards a new right

Who are the asteroids? The first to reach one of them is simply entitled to exploit their resources?

Modesto Seara, a pioneer in Space Law research, doesn't think this concerns us too much. For him, the mining that can be done in the bodies of space, or the permanent bases that can be established, “for the moment and for a long time will be closer to Hollywood films than to the international economy and politics.”

In Seara's opinion, other aspects to regulate are communications satellites, Earth teleobservation, space junk and, above all, positioning systems such as GPS are the topics that most concern Seara.

Space is understood as terra nullius, but this concept can be interpreted in two ways. On the one hand, have a shared territory, managed according to a consensus international law. But it is also a second interpretation: that the first to arrive are those who have the right to take advantage of it. Ready.

“On the ground, occupation has been allowed for the acquisition of a territory, provided that the territory does not belong to anyone or that the occupation is real and permanent,” explains Seara. However, it is clear that in order to obtain a territory in space, the same rules that have so far been used on Earth cannot be applied.

Should we then open the space to private initiative? According to Daniel Marin, his supporters argue that the incidence of politics is much lower and that private initiative is more flexible and economic than government action. However, private companies “do not invest in sectors that do not have immediate performance, such as solar system exploration.” In the long run, according to Marín, government-driven programs are often more stable.

It is difficult to predict if common rules will be agreed in space, and it is possible that to launch this debate there has been great advances in the paths undertaken by companies such as SpaceX or Blue Origin. Alongside them, new powers will begin the dance initiated by the United States, Russia and Europe, such as China, India or Iran. All will feed in chaos to the square of the universe. But it is about to see how they unfold together. We wish you a joyful party, but above all a pleasant and peaceful journey to the stars.

Shadow of two consecutive accidents
Last October was a bad, very bad, for the sector of private space travel companies. Two accidents occurred within three days.
On 28 October a Antares rocket from Orbital Science exploded a few seconds after takeoff. The charge was taken to the ISS and destroyed in the accident with scientific materials. It was, fortunately, an unmanned flight. 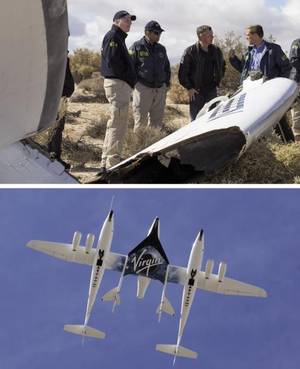 The remains of SpaceShipTwo, Virgin Galactic company, above, and a test flight, in 2010, below. Ed. US Transportation Security Agency; Mark Greenberg/Virgin Galactic
Orbital Science first served NASA in 2013 and has signed an agreement with NASA to make eight supply trips to the ISS. Last October was the third trip.
Three days later, on October 31, an even more serious accident occurred: SpaceShipTwo, of the Virgin Galactic company, dissolved in the air during a test flight with a new engine and fuel mixture. One driver died in the accident and the other was seriously injured. Virgin Galactic is a company that aims to bring tourists to space through suborbital flights that reach an altitude of 100 km. He has not yet made a business trip, but 700 people had made his flight reservation for $250,000. Virgin Galactic offered the possibility to cancel the reservation immediately after the accident, which many did.
Although the work areas and accidents of both companies have nothing to do with each other, the coincidence of both accidents has hurt the sector of private companies in space. As in these cases, security concerns have been put on the table.