"Being a woman in the primary sector and research has disadvantages" 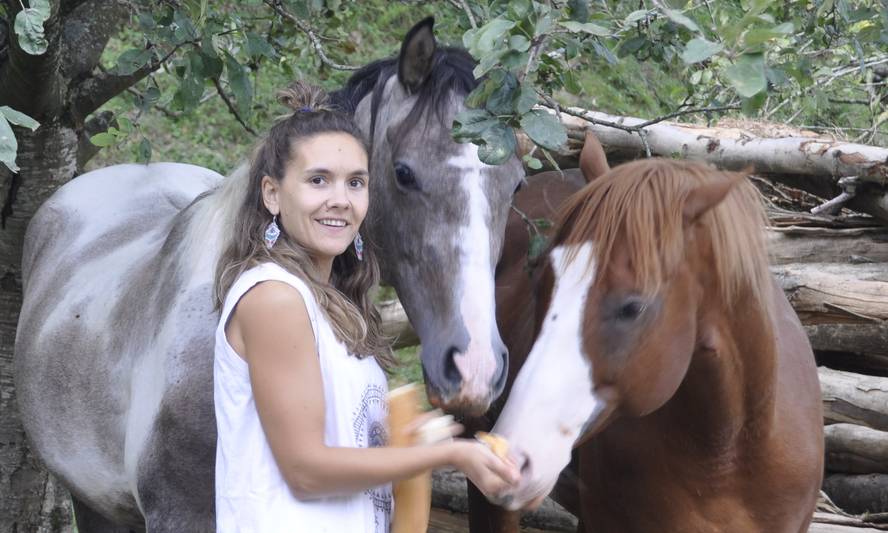 Izaro Zubiria was born in Ibarguren, Gaztelu, in a small rural town of Gipuzkoa, and has always lived surrounded by nature: "That's why I always liked nature. In addition, my father has also been very natural and has transmitted his love to me. Since childhood I started riding on horseback and we have always had dog, chickens...", he says. Therefore, it is not surprising that when choosing university studies he has chosen the option of Veterinary.

Do not regret, but remember the first blow he received: "Third. My father had a friend with cows of meat and that summer it occurred to me to work with him to study the work of livestock. When we went to his home, but immediately he told me that his veterinarian was a man, big and one hundred kilos; to see what I had to do, being a woman and so small." Somehow, he found himself with reality.

The second blow was to realize the scant social recognition of veterinary studies against other studies: "They are very demanding, very demanding studies, and your responsibility at work is also very high. People, however, do not see it and the profession is not to the extent that it should have been recognized."

However, he advanced and, being a little restless, already in the last year he began to look at what options there could be. Through a teacher she contacted NEIKER and worked for six months on various animal feed projects and in the insemination laboratory.

After completing the six-month internship, he saw the existence of a master's degree in food quality and safety and thought that, as he had already intended to apply for a doctorate grant, it could be adequate. “It was also a time of crisis and I thought it would help me open the doors,” he recalled.

After starting the master's degree, he was opened the possibility of carrying out the doctorate, presenting it, and was granted, which was first. “The opportunity touched me with a lot of illusion, although I was afraid to get into a thesis. I took samples, looked for solutions, proposed new ideas… for this I knew that it served, but having so many hours sitting in front of the computer scared me”. However, he decided to move forward.

Much of the thesis was to be carried out in the stable of the Fraisoro Agrarian School with cows, and the first time they took it with doubts, thinking that it did not have a stable profile.

However, between the practices and the thesis he worked in a stable of Vitoria-Gasteiz, like pawn, shattering cows… It was a hard and poorly paid job, but he learned a lot, and it was very useful to design essays, develop in the stable and treat him in front with the baserritarras: “When they saw that I knew how to do the tasks of the stable, they changed their attitude and helped me a lot.” He also did not limit himself to carrying out research work, but also carried out household work. “In the end, pawn work has been key in my professional life, because it has allowed me to understand the baserritarras, collaborate with them and make friends.”

Being a mother, double pain

Just starting the trials on the block had a surprise: he learned that he was pregnant. Both decided with enthusiasm that he would be his mother. Then he received another great blow: being with the fellowship did not correspond to him maternity leave. He could have enjoyed a suspension of up to six months without salary.

Faced with this injustice, she did not resign and worked until the last day of her pregnancy. When the baby was born, with the help of his director, his relatives and, above all, his partner, he returned immediately to work for not interrupting the scholarship. This led to motherhood to live with a bittersweet flavor, since the change and effort that involves the arrival of a child, especially in the first months, was added that of work. In addition, he had to listen to comments from people by discovering the total involvement of his father and the emptiness of his mother: “At that time my father spent more time with his daughter, they saw him in the street and told me. Society is not used to that image, but I did not feel good when I heard it.”

The Bridge clearly says: “That happens to a boy and nothing happens. He was going to be a father, he would continue working as he was before and ready.”

He finished the second essay and sat in front of the computer. But from an agrarian cooperative they offered him work to carry out animal feed and accepted the work. He had a second child and managed to develop R&D projects and cooperation. At that time he had knowledge of the contest CAF-Elhuyar and decided to present a work. Despite the work that the writing of the article gave him with everything else, he believes it was worth it. He won the special prize NEIKER.

“It gave me much joy. I felt that I finally received the recognition I deserved for all the work done,” said Zubiria. What's more, the prize has also been an incentive to resume the thesis. “I am a supporter of finishing the initiates, but I have not had enough illusion to carry out a job of these characteristics. Now yes, I am very active and I will try. Therefore, I have to admit that to me winning this prize has been a big boost.”

Born in Gaztelu in 1989. She studied Veterinary and, then, Master in Quality and Food Safety. He began his doctoral thesis and, although he suspends it for a while, returns to the research. Among other many works and projects, most related to livestock and food.