The RIVFunction project has investigated the speed at which the litter is broken down in 100 European streams and has measured repeating patterns everywhere. Since the rate of decomposition of organic matter is one of the health indicators of rivers and streams, its identification is useful for the development of verification instruments associated with the rate of decomposition. In fact, there are still not enough standard tools to analyze the functioning of ecosystems. 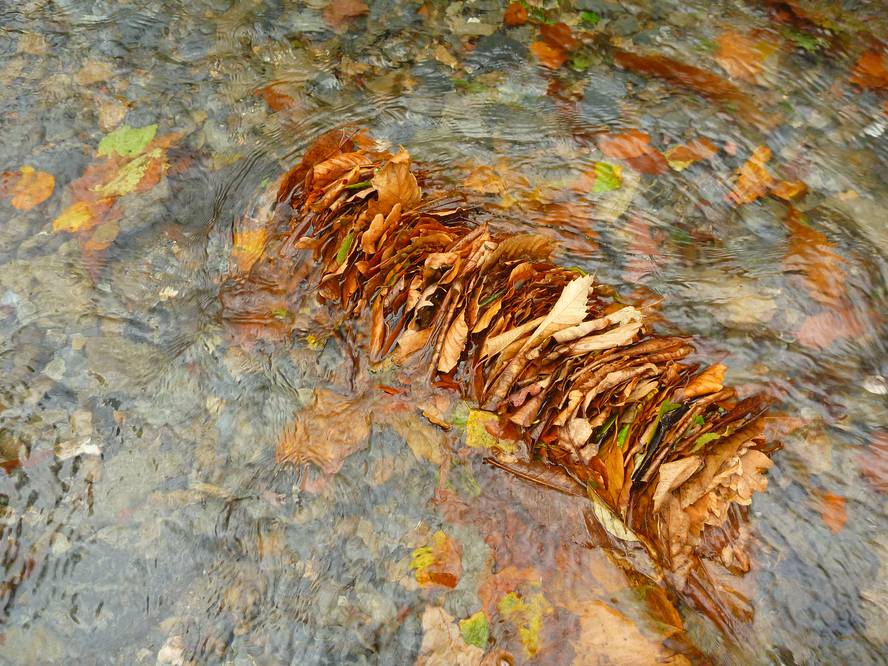 A researcher at the UPV analyzes the running of streams. To do this, they place bags of leaf litter in the river and measure the amount of litter that has disappeared over time.

Among the research groups that have participated in the RIVFunction project is the Department of Plant Biology and Ecology of the UPV/EHU. The working group has investigated the relationship between the decomposition rate of organic matter and nutrient concentration. “We took 100 streams from Portugal to the north of Romania and Sweden; each group analyzed 10 streams, and we carried out mainly the field work in the Encartaciones”, explains Arturo Elosegi, a member of the research, “we collected the streams of different concentration of nutrients [phosphorus and nitrogen], which were as close as possible to incorporate the lowest possible noise to the data”. Together with Elosegi, the research work has been directed by Jesús Pozo of the UPV.

A total of 2,400 bags of oak and alder litter were placed in rivers throughout Europe to measure the speed at which microorganisms and invertebrates were broken down, noting that as the concentration of nutrients increases the rate of decomposition, within lower and higher limits. The results have been published in the journal Science today. Although conclusions similar to those obtained in the research were already known, Elosegi stressed that this is the “greatest experiment of decomposition ever performed”. “This work at scale has never been done in the world and that gives it value,” he said.

According to Elosegi, the decomposition of organic matter is a significant indicator of the functioning of the river: “In the study of the rivers, it is usually attended to its structural characteristics: the quality of the water, the species that inhabit them, etc. But many times what really interests us is functioning. It's like when we take the car to the review. They check that the parts are in place, but what you want is for the car to work, that is to say, that the brake pads are fine and also stop.”

In addition to measuring, understanding

A researcher at the UPV analyzes the running of streams. To do this, they place bags of leaf litter in the river and measure the amount of litter that has disappeared over time. Ed. Free announcement

The data collected show that, only in terms of speed, the rivers would be inseparable, very clean and contaminated, since in both it decomposes very slowly. The reasons behind it are very different. In the former, they are characterized by the shortage of litter, by the lack of nutrients and by the scarcity of living beings that break it down. In the case of the contaminated, the authors of the study have found evidence that it is due to the toxicity of the environment and the disappearance of some invertebrates. “We say that the answers are not very simple. That is, if the heart goes slowly it can be because you are very calm or you are about to die,” Elosegi compared.

Elosegi is clear that the health of ecosystems, such as people, is not known by measuring a single variable. “In addition to this variable we must measure all the others, since all the chemical analyses of a river can say that it is well and that the presence of the communities has no problems, but its operation is very deteriorated.”

Despite the completion of the RIVFunction project, Elosegi and his team continue to work with variables to investigate the functioning of rivers, such as the measurement of the decomposition velocities of organic matter and the relationship of these variables with the rest of variables affecting the river ecosystem. In fact, a similar research developed in the Mediterranean rivers will soon be published in the journal Science of the Total Environment.

In this case, 76 points from the basins of the Ebro, Llobregat, Jucar and Guadalquivir have measured the decomposition speed of the wooden chopsticks: “We have used the chopsticks that doctors put in our mouth to check the throat, because it is very easy to leave them in the river, come back two months later and see how many have broken down. In the fastest decay zones, the speed is 40 to 50 times higher than in the slower decay zones. That is, there are rivers with very small stomach and others very fast. Why? We do not know. We should look at each case, but decomposition offers a very simple method of measuring its functioning.” Therefore, Elosegi considers a good variable for routine checking of streams, “to use something as an early indicator of what is remaining, as is done with biotic indexes.”