Decentralization. What a complex word! To defend myself I will say that Xuxen accepts it. But what does decentralization mean? Originally, the Web was a decentralized tool or means of information and communication, that is, it was designed for the information to be distributed over the network. But gradually information and communication services have been left in the hands of a few large corporations, that is, centralizing them. With the aim of revolutionizing all this and recentralizing the network (decentralizing it), numerous initiatives and tools have long been developing. Let us know. Both the Internet and the web, devised by Tim Berners-Lee, were created to have distributed networks in which information and communication tools would be distributed among the nodes of that network. And so it was in the beginning: web pages, web services and information were divided into multiple servers, being the main communication tool, email, a service distributed among many mail providers. But gradually, as the network becomes important and increases the number of users, the web became the target of large for-profit companies. And, as usual, these companies have achieved their goal: today, those few giants dominate the network and have become a centralized network. Berners-Lee is clear: “What was once a wide variety of blogs and websites has been compressed under the powerful weight of a few dominant platforms.” It goes further: “The Web has become an agent of injustice and distribution that is under the control of the powerful forces they use to benefit their own agendas.” But is it for so much? Is the web so centralized?

Let's think for a moment about the communication system that is most currently used instead of the previous email. Most use IM (Instant Messaging) programs (Whatsapp, Facebook Messenger, Telegram...), among which possibly Whatsapp is the most used. Both Whatsapp and the rest have behind them a company (in the case of Whatsapp, Facebook is behind) in which all communications are centralized and only serve to communicate with other users of the same service. The video conferencing is also widely used; the dominant system, Skype, is a centralized service, controlled by Microsoft, which only serves to communicate with other Skype users. On the other hand, the use of email is still very high, since before there were many mail providers and today you can count on the fingers of the hand service providers that manage emails from almost everyone, led by Gmail. Google, owner of Gmail, is the leader of the operating systems of mobile phones, and he, Android, forces us to do everything that does not force us to open a Gmail account. Also, many of the corporate emails of the companies, although with their own domain name, are those offered by these few suppliers.

And the same with everything else: Amazon is becoming the central hub for all purchases around the world; AirKbB and TripAdvisor, tourism; audiovisual content is consumed from Netflix; more and more websites are made in Wordpress and served through it; group collaborations are made on Google Docs in schools... And also, many of the existing websites and web services outside of them are available at the web hostel service offered by Amazon.

For some time now initiatives and alternatives are emerging to change this. For the first time in 2016, the Decentralized Web Summit was held to coordinate, promote and publicize them. The Congress website is a good place to learn about these initiatives. The Mozilla Foundation has also posted on its website a selection of the most interesting articles.

One of the best known and successful initiatives is the Activ\Pub: It is a standard defined and recommended by the W3C or World Wide Web Consortium (organization that defines the standards of the web and promotes the open web, created and directed by Tim Berners-Lee), which defines the protocol for a decentralized social network. Hence the name Activ\Pub: protocol to publish the activity (pub), which is what we do on social networks, make our activity public. With the open data format Activity Streams 2.0, the user offers a content creation and update API on a server and defines another API to share notifications and subscriptions between servers.

Perhaps the Activ\Pub is not known to us, but surely we have heard of the Mastodon service that has been built on it. Microblogging is a service to share, parallel to Twitter, but different: You can make toots up to 500 characters (equivalent to tweets) and above all it is decentralized. This means that there are several providers that offer the Mastodon microblogging service, but that registration in any of them allows the continuity of other users. Each service has its own rules, some services are built around communities... Thus, there is not a single company that decides what to publish and what not, or who has to close the account; in most providers there is no advertising; they are not designed so that we can spend as much time as possible; whoever wants can open a new server around the community you want, with the goal you want, etc. 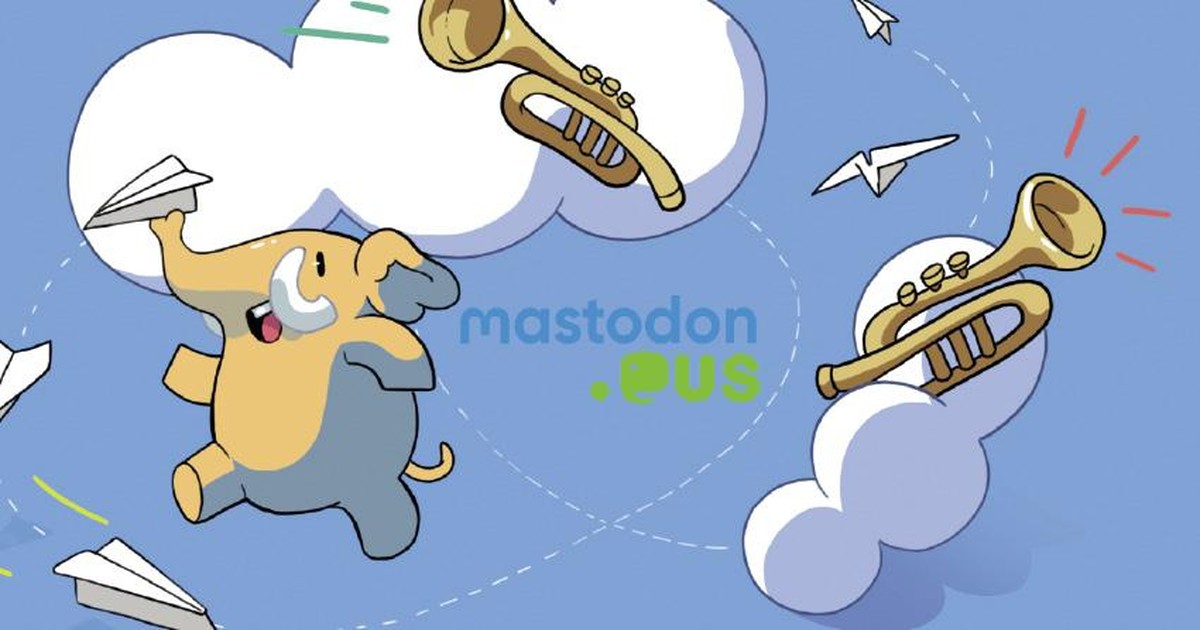 The Mastodon microblogging is a participatory, decentralized and federated service. IMAGE: mastodon.eus.

There are many such servers in the world, of which perhaps the best known is Mastodon.social. In the Basque community there is also more than one server, the best known being Mastodon.eus. There we will find Basque microblogaris, but we can also be followers of anyone in the world.

However, microblogging is not the only thing that can be done with Activ\Pub, but it is designed to publish and share all kinds of activities. For example, the PixelFed image sharing service has also been built, similar to that of Instagram, and another for videos, such as that of PeerTube, that of Youtube. But unlike the rest, PixelFed and PeerTube are distributed and several providers offer this service worldwide. When writing this article there are still no providers of these services in the Basque community, but surely it will also come. Also underway is the Activ\Pub distributed blogging service to share long articles, Plume.

Another important and well-known decentralization initiative is Nextcloud (or OwnCloud), a free software platform for hosting and sharing files. Through it we can save and share our files, contacts, calendars, tasks, bookmarks, notes, etc. and edit them together. It is also distributed and we can share our things with users of other servers, either in an online provider or on a server of our own. So, Google Calendar, Google Contacts, Google Drive, Google Docs, Dropbox, Delicious, Evernote, Google Tasks, etc. is an alternative and also distributed. This service is increasingly being seen in more companies.

To make distributed private communications (instant messaging, video conferencing…) other than email, there is a protocol: Matrix. Defines an HTTP API standard to post messages in a standard format, in real time and on different channels, on a server and subscribe to them. In short, this allows you to do things like what you can do on Whatsapp (communicate and share things in real time with a person or group) and make video conferences with Skype. But, of course, distributed. We may use a provider or service (one offered online or a Matrix server installed on our computer) and communicate with anyone else. This service is expanding and using more and more.

Noteworthy is the project Solid, which Tim Berners-Lee, creator of the web, is promoting in recent years. The word Solid comes from Social Linked Data. Its goal is for users to regain ownership and control of their data and information, which is lately in the hands of large companies. To do this, it aims to create a distributed platform for applications that work on structured data, the linked date, in which the data is under the control of the owner and the owner decides which applications its access is authorized, unlike what happens now, since now the data is transferred directly to an application and to the company that is behind, with all the permissions and property rights. He has also created a company to promote the project Solid, Inrupt. This is a project still in development, but as Berners-Lee is behind it, it will surely have to be followed.

In addition, there are many other projects and initiatives. For example, the Beaker browser allows you to browse the websites and host and serve the websites in P2P mode. On the other hand, the IPFS serves to do the same (host web pages in P2P mode instead of hosting them on servers) through software installed on users' computer. Indie Auth is a decentralized loging protocol that serves to authenticate in other services with the only user created in a service. The list is endless.

Some of the web decentralization projects and services may be in the development phase and/or immature, but most of them are already mature, extended and fairly proven. What do you need, then, to offer a service as good as centralized services and that is your real alternative? Just have more users. Why do we need a social network if not to share things with people? What if you have very few users? Or what sense does an excellent communication system make if it does not serve us to communicate with anyone because almost nobody uses it? However, if gradually people come together, once a minimal critical mass is reached, everything starts spontaneously, and the availability of the network and the massification of it will be given. If we try and start using all these services, we may get the web back to be the first time you never had to leave it.