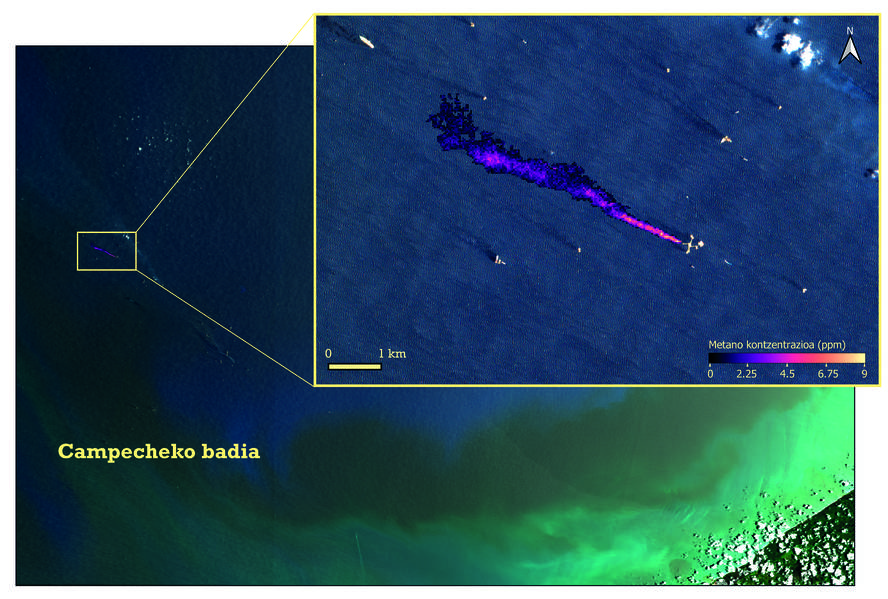 When we talk about weather emergency and greenhouse gases, the first gas we can think of is carbon dioxide (CO2). It is undoubtedly the best known and most abundant in the atmosphere. However, there is another gas that until very recently has remained virtually hidden: methane (CH4).

Methane is the main component of such desired natural gases at the moment, but it is also responsible for 25% of global warming that we are experiencing. It is the second most important greenhouse gas of human origin and has a global warming power about 80 times that of CO2 in 20 years from its emission into the atmosphere. However, this gas has a relatively short atmospheric life of about ten years. For these reasons, it has been proven that reducing methane emissions will, in the short and medium term, be one of the keys to halting global warming. Research shows that, if methane emissions are not drastically reduced, it will be absolutely impossible to achieve the objectives of the Paris Agreement, so in any case a truly critical future is expected.

Is the human being responsible for methane spills?This gas
has several sources, both natural and human. Natural discharges (caused by wetlands, activities of various living organisms or geological activities) are part of the carbon cycle and are generally compensated by nature itself by the sequestration of the amount of gas expelled from storage ridges. On the contrary, emissions associated with human activities are not compensated so easily, as in a very short time we are emitting huge amounts of gases, far from the proportions that natural sinks can handle.

A study in 2020 estimated that about 60% of all methane emitted into the atmosphere in 2008-2017 came from human activities, mainly livestock (31%), rice production (8%), oil and gas supply chain (26%), coal mining (11%), landfills (14%) and waste water treatment (6%). However, methane, as an invisible and odorless gas, is full of unknowns and it is not yet clear what proportion of emissions each sector corresponds to the total.

Fortunately, much progress has been made in related science since 2020, and it is becoming increasingly evident that the emission estimation methods used so far are vague, to the benefit of some sectors, and the urgent need to update official inventories with new methods.

For example, according to data published by the International Energy Council in its latest report, actual emissions from the energy sector are at least 70% higher than those in official inventories.

How do we change data from one to another?This transformation of data is due, on the one hand, to a considerable increase in awareness of the problem and the social will for clearer and
more transparent data and, on the other, to the rapid development of new technologies. Among the latter, it should be noted that high-resolution satellites provide more and better data.

The satellite observation of methane is not new, we already had global data from 2003, but until recently, this data was low resolution. That is, each pixel in the figure covered a large surface of planet Earth, pointing out countries or regions with higher concentrations of methane, but there was no possibility of finding an exact source.

This started to change substantially in 2020, when the first high-resolution public satellites capable of detecting methane started providing data.

Since then, the detection methods for this gas have changed a lot. Synergies between satellites have enabled better use of low resolution sensors for more useful information. And it's been proven that other satellites that worked for many years could be able to detect methane.

The outbreak of data
in the light of emissions has taken us away from the eyes of scientists and many politicians: for two years now thousands of discharges that did not exist for society have begun to come to light.

For example, we now know that at least 3-4 ultra-daily emissions of more than 25 tonnes per hour of methane occur in land areas. They are huge short-term emissions, most of which are associated with activities related to gas and oil, which so far have not been recorded anywhere.

Tens of oil extraction plants (probably hundreds) have also been made public and are constantly expelling more than 1,000 kg/h of methane into the air.

As an anecdote, our research team tried to test a technique for detecting leaks from marine platforms, much more complex at sea than on land surface, due to the properties of water, requesting a private satellite image, in the Mexican environment, capable of applying the technique. Until now, the only data on discharges from offshore platforms were those provided by the workers themselves, and it was generally considered true that they had lower discharges than land-based installations. So we didn't expect to find anything extra in this image, but look, in the first image we got, we found a methane spill of 92,000 kg/h.

From data from other public satellites, we learned that this broadcast was part of a 17-day ultra-emission event. And once all the data was collected, it was estimated that 40,000 tons of methane were emitted into the atmosphere in those 17 days.

As a reference, Mexico officially estimates that it discharges 44,000 tonnes of methane annually from marine facilities. In other words, only this would result in almost all the annual estimates of these, and we know that since then they have had other ultra-emissions.

Now, the Mexican Government has envisaged drastic measures to sanction the company and resolve once and for all the problems that are taking place on the platform. Recently, these measures were unimaginable.

So what about the future?
This technology is so new that almost everything is yet to be investigated. The examples above are only the principle.

In the coming years, better satellites created specifically for the detection of methane and other greenhouse gases will be launched into orbit (those currently in operation are able to see very high methane emissions, but were not built for this purpose), which will allow us to locate thousands of unknown sources today. Knowledge of specific sources of methane of human origin will make it possible to implement effective emission cutting measures and clarify the actual proportion of emissions for each sector.

In this state of weather emergency, climate offers an alternative that we cannot allow the passage of identifying and repairing methane sources. It is estimated that a 40-45 per cent reduction in fossil fuel-associated methane emissions would avoid an increase of almost 0.3 °C by 2045, and would complement long-term climate change mitigation efforts.

To realize these cuts, the United Nations has launched the International Methane Emissions Observatory (IMEO). One of the objectives of this project is to join countries around the world in the Global Methane Pledge agreement, which has already signed more than 120 countries representing 70% of the world economy, which sets out a commitment to reduce methane emissions, as well as to launch projects to identify and stop as many global methane sources as possible, including a project to generate satellite alerts. The ultimate objective is to stop all discharges of human origin that can be avoided.

If the objectives of the IMEO programme were to be achieved efficiently and at the same time a strong transition to renewable energy was achieved, I would like to say that in 50 years' time my research area would be in danger of being lost as it would not be necessary to detect emissions of methane from human origin.

However, just as satellite observation is almost infinite, the problems and unknowns that exist and will occur on planet Earth will probably remain unlimited, so I am sure there is still a working time.