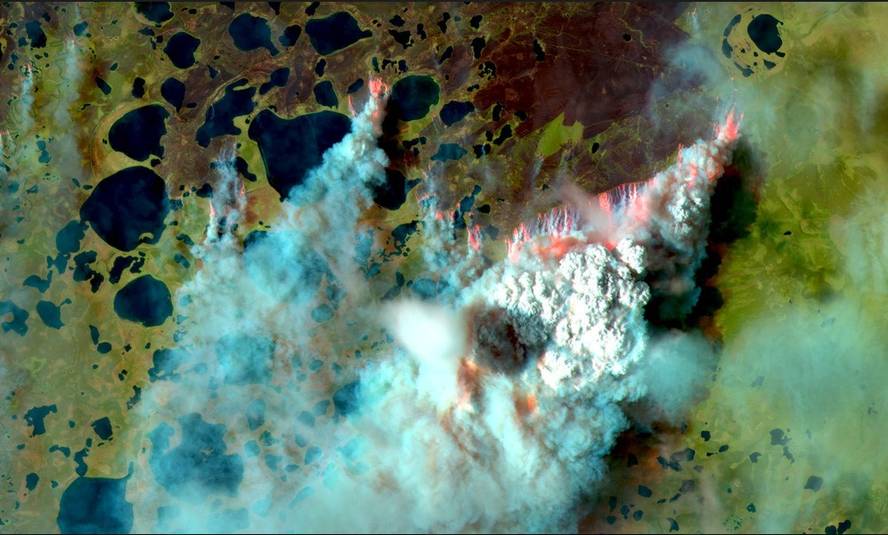 Fire of 30 km in the Arctic. Ed. Adrià Descals

In 2019 and 2020 there were many more fires than usual in the Arctic. This is particularly worrying because of the presence in the area of large peatlands in the permafrost, in underground layers that have so far been frozen. In these peatlands, a lot of carbon builds up that's emitted by fires. A study published in Science shows that increased fires in the permafrost are not random, but are directly related to climate change: As Arctic temperatures rise, fires rise exponentially.

Researchers have analysed satellite data over the period 1999 to 2020. Summer 2020 was the warmest in four decades and the area burned between 2019 and 2020 is unprecedented: 4.7 million hectares were burnt and 412.7 million tonnes of CO2 were emitted. In addition, fires occurred in 2020 above 72 north parallel, 600 km north of the Arctic Circle, in an area where fires are very rare. Researchers believe that dry storms and lightning are the main cause of fires, although they see the need for more research to know the impact of human activities.

Risk factors such as drier atmospheric conditions, longer summers and increased vegetation have increased considerably. All of these factors are directly related to temperature increase. Furthermore, researchers have announced that these conditions will be absolutely common by the end of the century.

Fires and carbon emissions are not the only threat posed by defrost. Scientists have been warning about the threat of bacteria and viruses frozen in the permafrost for years. A recent study on an icy Arctic lake has concluded that climate change could lead to the emergence of frozen viruses so far. They have warned that for millions of years the tomb of pathogens is thawing and that it could become a fertile land for new pandemics.

In Siberia, in 2016, there were about 20 anthrax cases in people. And research showed that anthrax came from thawing permafrost. Smallpox and the bubonic plague are also frozen in Siberia, and fragments of RNA from the 1918 flu virus have been found in bodies buried in the Alaska mass graves. And not knowing what else there can be. In another study last year, ice samples from the Tibetan plateau found the genetic material of 33 viruses, of which 28 were new and were estimated to be about 15,000 years old.