The Lower Palaeolithic demonstrates the human presence in Praileaitz

In the cave of Praileaitz I (Deba, Gipuzkoa), about 200,000 years ago, signs of human presence have been found, such as stone tools used by them and the fossils of the animals eaten, including the bones of a large mammal of the elephant family.

Remains have been found that some 200,000 years ago humans lived prailing. Ed. Xabier Peñalver Iribarren/Aranzadi

Xabier Peñalver Iribarren, archaeologist of Aranzadi and director of the excavation, has unveiled the findings and stressed that they are truly exceptional: “We never get such old tracks in an absolutely stratified place,” he said. This gives enormous value to discoveries, allowing them to date them accurately. 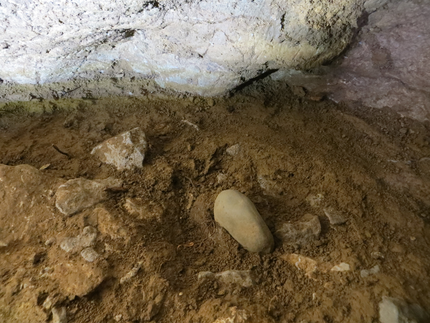 The remains are in a stratigraphic environment. In the image, carved stone. Ed. Xabier Peñalver Iribarren/Aranzadi

In the excavations 2017-2018 levels have been reached with numerous remains of lithic industry and animals. Among the first are stone tools and materials, all with characteristics of the Lower Palaeolithic. In addition to a carved stone, two slabs have been found, which are a sample of the size of the stones.

As for the fauna, 578 tracks are being investigated and Peñalver has highlighted part of the calcareous of an Elephas antiquus or mammoth. He also mentioned the canines of a bear Ursus spelaeus, dated between 150,000 and 200,000.

The remains found so far in Praileaitz (pendant, paintings…) were from the Upper Palaeolithic. However, archaeologists have long suspected that the cave contained treasures not yet found, so they have repeatedly requested the paralyzation of the quarry works, which endangered this heritage.

Once again, Peñalver has explained that below the level they have analyzed, there are another 6 meters of sedimentation, and has announced that new spaces from the time before the Neanderthals can also appear.

Traces of a life 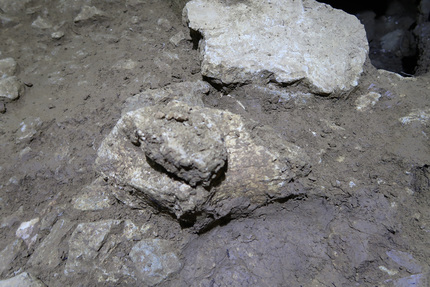 Among the animal bones is the calcaneus of a species of the elephant family. Ed. Xabier Peñalver Iribarren/Aranzadi

“At the moment, we know that in the lower Palaeolithic, humans lived here, that in the cave they worked with stone tools and that they ate elephants,” said Peñalver. These large animals, however, would probably not be blinded, as with these utensils it would be very difficult to kill an elephant. It is very possible, therefore, that those human beings eat dead animals.

In addition, he confesses that they do not know if the calcaneo stretch is from Elephas antiquus or a mammoth. The first is temperate and the mammoth is glacial or interglacial. The identification of remains of other animals, such as monkeys or moose, will help resolve the doubt, as well as the analysis of the pollenara.

He has spoken about man wisely. He says that Lezetxiki's human footprint is 164,000 years ago and is considered a forerunner of Neanderthals, so he believes that Prailea's could also be so.

Finally, he stressed that the information provided by the remains is very complete and has requested that the cave be protected “completely and effectively”.