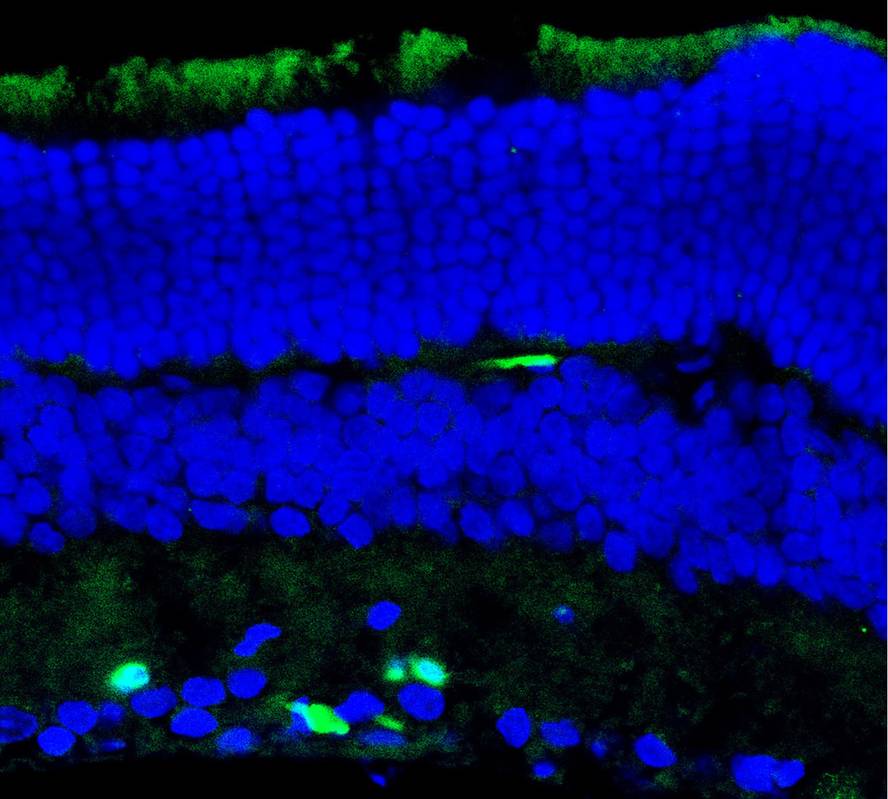 Cut into the mouse retina. What is green is the set of cells that have undergone mutation. Ed. Miguel Hernández University

A research team of the UPV-EHU has developed a method of gene therapy applied to low-cost and safe eye diseases, checking its use in vitro and in vivo. Pigmentary retinosis, macular degeneration and sex-related juvenile retinossis, for example.

Nucleic acids such as DNA or RNA are used as drugs in gene therapy. In fact, some diseases are characterized by the alteration of the expression of proteins, which can be corrected by the incorporation of these acids. The novelty of the research lies in the use of non-viral vectors for DNA transport. In fact, gene therapy is applied in most cases viral vectors, which so far have been the most effective. But because they are viruses, they generate security problems due to the risk of infection and their reduction has great difficulties. Therefore, the challenge has been to improve the results of non-viral vectors, since the method would be safer and cheaper.

Specifically, solid lipid nanoparticles and peptides have been combined to build this non-viral transport system, are biocompatible and biodegradable materials. In vivo experiments performed by injection into the mice retinas have yielded good results by achieving the transformation of local cells. But not only that. “We did the test applied topically to the cornea and saw that it also influenced local cells. If progress is made on this path, it would be possible, for example, for the cellular mutation to be done with colirio”, explained one of the researchers Diego Delgado.

The study was carried out in the team of the Faculty of Pharmacy of the UPV/EHU, led by Alicia Rodríguez, together with researchers from the University Miguel Hernández of Elche and the University of Würzburg. They have published an article in Human Gene Therapy. Now it is a question of whether the effect of therapy is maintained in the long term and performing in vivo experiments with mice that have some eye disease.