What genes help us read? 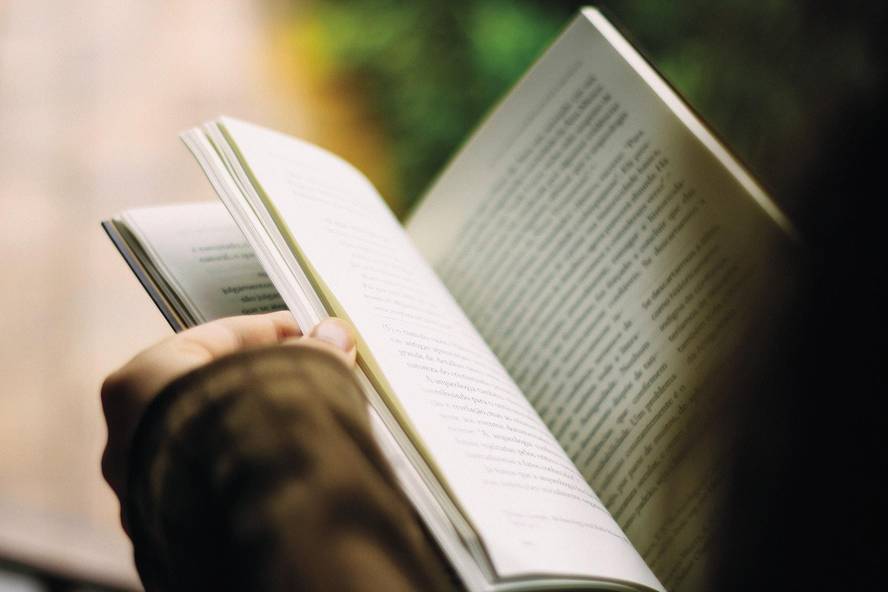 Reading is a task fully integrated in our daily lives. Some more, some less, but who doesn't look at newspaper day headlines? Who does not receive many emails, whatsapp and the like every day? Although reading in our environment was a common practice, only a minority had that ability in other times and places. Even in literate societies, where thanks to schools we have all received that specific training to learn to read, reading is not as easy as it is believed for all people. The aim of this article is to analyze the influence that genetic factors can have on reading ability.

Do we all read the same?

When a child reads worse than expected for his age, education and intelligence (i.e., making more mistakes than necessary or more slowly), he is considered a dyslexic. Although the definition is not fully consensual, a definition of exclusion is generally accepted: the difficulty of reading in a dyslexic person should not be a consequence of other factors (for example: low level of intelligence or lack of resources to learn). According to the population, dyslexia has a prevalence of 5-10%. That is, in a room of twenty children, one or two would have difficulty reading.

Although dyslexia is categorically understood, it can also be considered as the bottom of a continuum (Figure 1). In fact, as with other characteristics (height, for example), there are people who read better than others (or some are higher than others); most have an average level (most have an average height), but there are also people who have a level quite lower than the average (relative to the height are lower). The latter would be considered dyslexic. On the other hand, there are others who read much better than the average (for example, as high as basketball players), but not having problems we do not include them in a specific category. In this article we will treat dyslexia as a reflection of low reading.

There are many steps to illustrate the genetics of reading: first, (1) clarify whether genes are affected, then, (2) identify significant parts of the genome, and finally (3) analyze the consequences of variability in the DNA level present in those parts.

How important is genetics?

The influence of genes on a characteristic is calculated by comparing the differences between the monozygotic (identical) twins and the dizygotic (similar but not identical) twins. 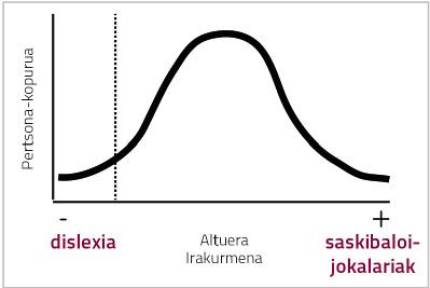 Figure . Image of the distribution of a continuous feature. In Axis X there is a variability of characteristics that in red appear the ends of variability. The discontinuous line represents the conventional threshold. If we consider dyslexia as the low end of reading, we would classify as dyslexic those people below the threshold.

In fact, monozygotic twins come from a single zygote and contain 100% of the genetic material. The dizygotic twins, on the other hand, come from different cigarettes and, like other brothers, share 50% of the DNA. Both types of twins allow an appropriate experimental design, since in addition to the DNA they share most of the factors of the environment (birth on the same day, atmosphere at home, food, school, etc. ). Therefore, when analyzing a specific characteristic (e.g., height or dyslexia), if monozygotic twins are more similar to the dizygotic twins, it can be thought that this greater similarity is due to an additional DNA (50% remaining) equal.

This measure allows us to know what percentage of variation of a characteristic can explain genetic variation. Some studies have estimated that using the design of twins, genes represent between 30% and 80% of reading. We therefore know that dyslexia and reading are also partly conditioned by genetic factors.

What and what kind are these genetic factors?

Studies conducted for nearly twenty years have not provided us with easy answers. Several genes have been linked to reading and dyslexia (names of the best known are ROBO3, DYX1C1, KIAA0319, DCDC2 being) and, taking back the biology of these genes, some processes that are important in the brain able to read effectively have been identified. For example, they have seen that some of these genes are important for neurons to migrate to their corresponding layer of brain. However, it is not yet clear how the pieces of this puzzle match to create a readable brain.

If we compare the genomes of two people (i.e. all their genetic material), we observe that there are many differences in their DNA sequence. Understanding the influence of these genetic differences in biology is one of the main challenges of modern genetics, since if they affect it, many of them are without consequences. 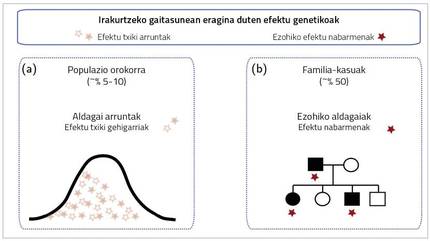 Figure . Outline of the types of genetic variations that may affect reading ability. (a) The distribution of the two common genetic varieties (stars) is shown. If people with lower reading have more of these variants, these genetic variants act as risk factors and have small additive effects. (b) Image of a family of six members. The squares are men and round are women. In black, members with a diagnosed dyslexia; in white, members without dyslexia. The star represents an atypical genetic variant, which has its relatives with dyslexia.

To facilitate this interpretation it is important to take into account the frequency of genetic variations. In fact, the frequency of a variant at the population level indirectly provides significant information. Most of the genetic variation that determines our height, for example, is normal (high frequency). Each change has very little incidence and acts as a risk factor. Many of these genetic factors further influence height. On the other hand, if a certain DNA change directly affects a disease or characteristic (e.g., Parkinson's or dyslexia), the frequency of this variant should be lower than that of the characteristic that produces it (in the case of Parkinson's, 0.04-0.1%, in the case of dyslexia, 5-10%). If it were not so, at the population level, there would be people who do not develop the disease but do have that change and the causality of the variation would be in doubt.

For reading and dyslexia, both normal and abnormal genetic variations can influence (Figure 2). Taking as a starting point the extraordinary changes, we have looked for new genes.

Considering the prevalence of 5% of dyslexia, it should be noted that in some families half of its members (50%) are dyslexic. Therefore, we can think that in this type of families there can be some exceptional genetic variation that has a great influence on dyslexia. We have studied two families who have had more than ten dyslexics in three generations to look for new genes that can influence dyslexia.

First, in each family we have defined which areas of the dyslexic genome are the same using the analysis technique called linkage. On the other hand, we have taken advantage of genome sequencing to know the entire genetic code of some family members. Combining the Linkage analysis and sequencing, we can observe the variation in those intervals in which the dyslexics of a family are equal, describing the genetic variation that only have them or that has a low frequency in the population.

In one of the families, the linkage analysis (which appears in Figure 3 with the name of DYX9) has highlighted a part of the X chromosome, but in this area we have not seen abnormal variations affecting proteins (and therefore can have consequences in the cell). Variation outside of genes has also been studied to look for some genetic variant that may influence gene regulation, but it has not been found either. Although it seems to follow Mendel's rules, the genetic factor that causes dyslexia in this family may not be the only genetic change.

In the second family we have performed the same type of analysis. On the seventh chromosome we found an area of interest, the eleventh of 13 dyslexic relatives and none of the other members have. In the genes in the area there will be no variations that could affect proteins, but two variants have been found that could affect gene regulation. These variants are found in the SEM3C gene area. This gene is interesting because it influences the organization of the brain, as well as other genes related to dyslexia. However, the genetic variation found is not quite rare, as it presents a frequency of 1% in the general population. Therefore, we cannot conclude that it serves to fully explain the dyslexia of this family, since if so, 20% of cases of dyslexia should appear. However, dyslexia in this family may be a consequence of this variation and the interaction of other factors. 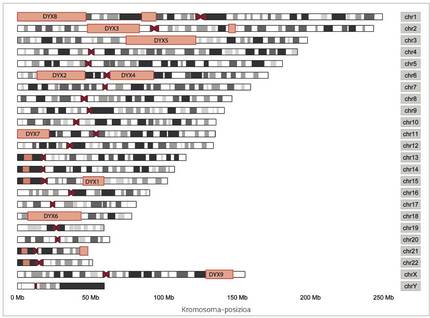 Figure . Genome representation on chromosomes (one row per chromosome). Dyslexia areas are marked in orange. The most prominent areas are called DYX1-DYX9. There are hundreds of genes within each area.

Genes influence more aspects than expected. These include reading and other cultural activities. As in many other characteristics, genetic factors that influence reading are heterogeneous: on the one hand, normal changes can lead to additional minor effects (as with height), and on the other, low-frequency changes can have a greater impact (in families with many dyslexics, for example).

The technological revolution of recent years has allowed to develop knowledge of genetic variation at high speed. Although it is easy to know what the sequence of DNA codes is, it is no easy task to understand the meaning of the code. New technologies can identify new genes that can influence reading (or dyslexia that defines it) and can be the starting point for analyzing the biological mechanism of this capacity.

It is difficult to summarize the influence of the common genetic changes described so far, as we are immersed in the noise that causes relatively small samples. In the coming years, thanks to collaboration between researchers, the challenge will be to increase the samples (up to over 10,000 people). These large numbers allow us to differentiate the effects of normal variation from statistical noise.

The next challenge will be to look for a biological mechanism that explains the reflection of genetic factors in reading. Thus, little by little, we will understand better why it costs us more to read one than another.

Work presented to the CAF-Elhuyar awards.