How many are they? Four, one, three, five, seven?

Science has made rapid progress, cancer research and the knowledge we have of it. This has made it possible, among other things, to know more and more types of cancer and to describe some characteristics common to them all. But how many and what are the capabilities cancer cells acquire when they are malignant?

Cancer is the disease produced by permanent, abnormal and autonomous cell proliferation. Depending on the organ or body tissue in which this uncontrolled growth occurs, the cancer receives some surname, making a general classification of cancers.

The World Health Organization (WHO) produces the best known and most widely used guide to these surnames and publishes other general information annually. These include, for example, the map representing the incidence of all cancers per inhabitant and country. Figure 1, based on data for 2020, shows that the highest incidence is in the most developed countries in general (Europe, North America, Australia and New Zealand and Japan).

Our cells constantly fragment and old cells die and new ones take their place. When you lose control of this substitution process, more new cells form than those that die and those that don't die accumulate defects to form tumors. Tumors may be benign (non-disease-causing) or malignant (carcinogenic). On the other hand, the malignant tumor can spread to surrounding tissues and produce other tumors. This phenomenon is called metastasis.

Cancer, in general, is due to the accumulation of genetic changes that give cancer cells the ability to transform and abuse. Genetic changes or mutations may be conductive (with a direct impact on cancer) or transient (with presence in cancer cells but without a direct impact on the disease). Currently, research is looking for driving changes, new medicines to combat them, easier diagnosis and classification, etc.

Throughout tumor development, cancer cells acquire characteristic biological capabilities, common to cancers with different surnames, but not seen in healthy cells. After the first steps in studying the molecular aspects of cancer, in 2000 Douglas Hanahan and Robert A proposed six competencies. Weinberg, considered pioneers in the genetics of cancer, in the name of “The Hallmarks of Cancerista”, at the date of its partition, in the prevention of apoptosis, in the provocation of angiogenesis and vascularization, in the activation of invasion and metastasis, in the potentiation of replicating immortality and insensitivity to receptors (Figure 2 and glossary).

The proposal of these two researchers was generally accepted in the world of science (the most cited article in the well known journal Cell), but it has also received some criticism. A study published in 2010 in Nature Reviews Cancer indicated, for example, that of these six competencies only one is characteristic of cancers, the remaining five are also benign tumors.

After 11 years, Hallmarks of Cancer: The same authors updated what was previously published in The Next Generation with the inclusion of four capabilities in the list: deregulation of cell metabolism, genomic instability and mutations, prevention of inflammation and immunological destruction that favors tumors (figure 2 and glossary).

This extension of the list was particularly possible because of technological advances. Next Generation Sequencing technology, blinked by the title, or mass sequencing, provides a lot of information about genes that are expressed in cells, and that helps us explain, among other things, the behavior of cancer cells. But not only that, but the biology of cancers cannot be understood only by studying the characteristics of cancer cells, but also as the influence of tumor microenvironment on tumor formation, incorporating a new focus in the study of cancer.

The latest update was published by Douglas Hanahan alone in 2022, forming a list of 14 capabilities that cancer cells acquire when they are transformed: Under the title New Dimensions. The capabilities added in this last work are the unlocking of phenotypic plasticity, senescent cells, polymorphic microbiota and epigenetic reprogramming without mutation (Figure 2 and glossary). 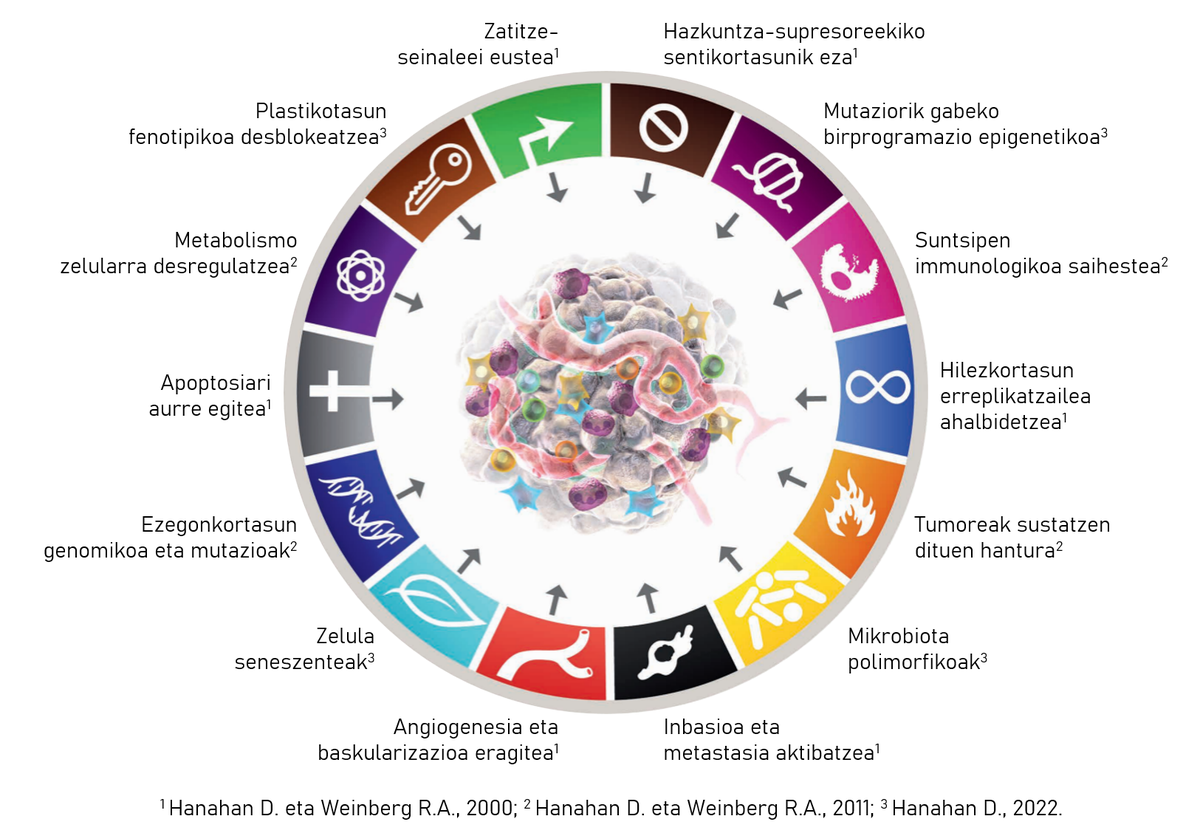 Figure . [Capacities of cancer cells in their transformation]. Ed. D. Hanahan, Adapted from 2022.

The advances made in other fields in recent years have allowed us to use increasingly experimental and computational technologies in biomedical research, introducing ourselves into the world of big data. Thus, they provide us with resources to better understand the mechanisms of development and malignancy of cancer and apply this knowledge to medicine.

It is noteworthy that although each of these differential characteristics of the aforementioned cancers has been defined as individuals, its regulation is interrelated in many of them. Therefore, an integrative approach is needed to understand the biology of each type of cancer.

According to Hanahan himself, the publication of these new interim proposals aims, among other objectives, to stimulate debate on the definition of the biology, genetics and pathogenesis of cancer in the research community and to promote experimental research. Thus, a final consensus agreed by the scientific community would be achieved when defining the number and capacities of cancer.

Therefore, continue research in any field, including cancer, and why not update the list of differential capacities for cancers by 2033!

Angiogenesis and vascularization: Cells demand more blood from the body for more nutrients and oxygen.

Fight apoptosis: Cells will not die when they reach age that would die in normal conditions.

Genomic instability and mutations: Easy to produce changes in the DNA chain, favoring the accumulation of new mutations and, therefore, the appearance of tumors.

Lack of sensitivity to suppressors: the brakes don't work, the cells continue to grow and fragment constantly.

Allow replicating immortality: cells will have the ability to produce an infinite number of events, continuously fragmenting them and creating new cells.

Activation of invasion and metastasis: painful cells travel to surrounding tissues or organs, usually through blood vessels, producing new tumors in other parts of the body.

Polymorphic microbiota: The microorganisms present in the body are different among healthy people and people with cancer.

Epigenetic reprogramming without mutation: from one point onwards, without any further mutations, tumors continue to evolve/worsen.

Unlocking phenotypic plasticity: cells maintain the ability to continue transforming even when they reach maturity, although this transformation capacity is blocked under normal conditions.

Inflammation that promotes tumors: In areas of inflammation the cells of the immune system are concentrated, further enhancing the tumors.

Maintenance of signals at the time of their dismemberment: the cells maintain the throttle tread, in continuous division.