In search of the music of the universe: gravitational waves 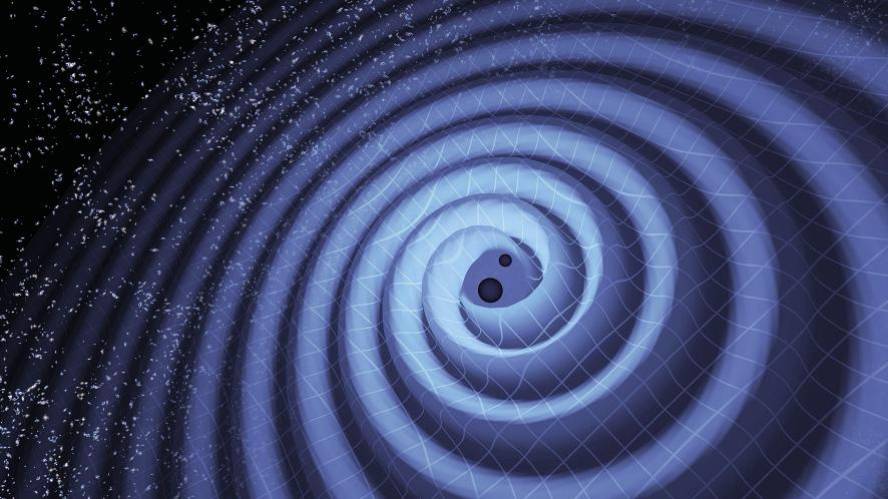 Clash between two black holes. They perform elliptical orbits around their mass center. Meanwhile, they emit gravitational waves and lose energy. This makes it closer to each other, until in the end the tw

About 1 billion years ago, the Earth was ending the geological period of Proterozoic. Life was not complex, but simple organisms existed and our atmosphere was filled with oxygen, the planet was becoming ideal for more complex organisms.

Meanwhile, at the other end of the universe, two huge black holes of 30 km of radio revolved around each other, giving way to one of the most violent episodes of the universe. The distance between them was around 350 km and the relative speeds were 100,000 km/s. It only took a moment (0.2 seconds) to crash and form a single black hole. As they moved, they produced large deformations in continuous space. If we could witness this process, the measured time intervals and spatial distances would be reduced and increased periodically as the gravitational field adapts to the variations of black holes. Those are precisely the gravitational waves that were emitted by these giants after a few seconds. It was then that this disturbance began its journey through the universe.

Meanwhile, our atmosphere stabilized forming more complex living organisms on earth. Among them, less than a million years ago, humans, endowed with abstract thoughts, began to build theories with the intention of understanding nature. As for gravitation, in the last century we have learned a lot. In fact, the existence of gravitational waves was not accepted until the 1950s. But most scientists then thought it would be impossible to detect them, their effects are so small. However, history did not take long to discourage these scientists.

In fact, on September 14, 2015, two LIGO detectors (from the English, Gravitational Wave Observatory for Laser Interferometry) measured a signal: their 4km arms were vibrating, stretching and shortening. This change in length was minimal (smaller than the size of a proton), but measurable with the technology developed for LIGO. After the signal analysis it was concluded that a gravitational wave formed by the collision between two black holes was detected. The signal generated by these two black holes, after a long journey, ended up reaching Earth and in fact we have witnessed its impact.

In 1915, Albert Einstein published a new theory to describe gravitational interaction: general relativity [1]. It perfectly described the previously known effects. But the theory also concealed a series of unexpected consequences. Among them, gravitational waves: the vibrations of continuous space-time. 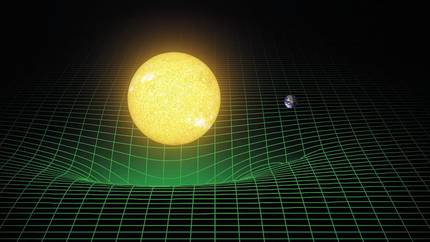 To describe gravitational interaction, general relativity assumes that we live in a four-dimensional continuum. The three usual dimensions are the spatial ones (depth, width and height) and the fourth the time. This continuum deforms when we put in it energy or mass. Like when we put a weight in the center to an elastic mesh, if we release a ball on the net, it falls towards the central body, following a curved movement. That is what happens to planets when they move in a space time deformed by the Sun. Instead of moving properly, they perform curved orbits. Therefore, general relativity explains gravitational interaction as a deformation of continuous space-time.

As for gravitational waves, Einstein predicted them in the years after the publication of his theory [2-3], and Oliver Heavid and Henri Poincaré gave the idea postulated earlier [4-5] a precise mathematical formulation. Just as accelerated electric charges emitted electromagnetic waves (light), accelerated masses should also emit gravitational waves. When the bodies move, the deformation they produce in a continuous space time is changing, and that change is transmitted through the continuum, like the waves that a ship produces when it moves in the sea.

But can gravitational waves heat a glass of water?

Over the next four decades there was a profound scientific debate about the existence of these waves. The mathematical formalism of general relativity was so complex that it was very difficult to deduce clear physical interpretations from it. In short, the question was: Were those waves that presented mathematically in theory physical? That is, do they transport energy?

Einstein himself has changed his mind several times. In 1936 he tried to publish, together with his collaborator Nathan Rosen, the mathematical demonstration that denied the existence of gravitational waves. The article was not approved in the prestigious journal Physical Review, but its conclusions were modified and published in another journal [6], concluding that they then found a special wave type (nowadays they are called Einstein-Ros waves). Finally, in the 1950s, several physicists obtained undeniable theoretical evidence of the existence of gravitational waves [7-8].

The next step was the experimental detection of these waves. The most energetic waves occur when violent astrophysical episodes occur (in the collision of compact objects or at the beginning of the universe), due to the great deformation of space time. But enormous precision is needed to measure the deformations produced by these waves upon reaching Earth: The distance from Earth to the nearest star amounts to measuring it with the error of the width of a hair. However, in later years these waves were detected in two known experiments. 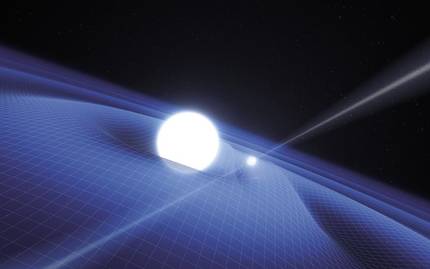 A pulsar emits radiation from its magnetic poles. In the image appears a press that revolves around another star. The system, by sending gravitational waves, loses energy and decreases the distance between the stars. ED. : ESO/L. Calçada.

A pulsar is a star of very high density and small size (radius 10-100 km) that rotates very fast around its axis (it takes a few seconds to complete a lap). The surrounding magnetic field is very large and emits electromagnetic radiation (light). This radiation leaves the magnetic poles, which gives the shape of a beacon to these stars that rotate and emit two rays of light in the opposite direction.

In 1974, astronomers Russel Hulse and Joseph Taylor were studying such a typical pulsar. It rotated every second 17 times around its axis, normal between these stars, so it had a period of 59 milliseconds (interval between two pulses). That pulsar had the particularity that it was in orbit around another star.

Observing this, it was concluded that two stars performed elliptical orbits around their mass center, but that the distance between them was also narrowing. In order for this approach to occur, the system had to be losing energy, and the only way to do so was through the emission of gravitational waves. They tested this hypothesis and found that experimental data were very precisely adjusted to the energy loss predicted by general relativity [9]. It is therefore the first observation of gravitational waves, so Hulse and Taylor received the 1993 Nobel Prize in Physics.

But the observation of Hulse and Taylor was not direct, but indirect. That is, gravitational waves were necessary to explain the dynamics of this binary system, but there were still no devices for its detection.

In the 1990s it was proposed that gravitational waves could be measured by interferometry and several detectors were built (LIGO in the United States [10], VIRGO in Italy [11] and GEO-600 in Germany [12]). All of them were based on the fact that the relative deformations produced by gravitational waves are very small, so something very large must be deformed. Therefore, the detectors consist of two perpendicular arms of 3-4 km. In addition, a laser is used to accurately measure the length of each arm. The laser is sent from the meeting point of the arms and, once reflected in a mirror located at the end of each arm, returns to the origin. Finally, the laser beams returning from each arm are superimposed. As long as the arms lengths do not vary, the supernatant of the rays will not vary, but when the length changes, it will be visible in the profile that generates the overlap.

The following images show the two LIGO gravitational wave detectors with arms 4 km long. Two equal copies were built, one in Louisiana and one in Washington, to rule out the scrubs that can cause local effects. ED. : Caltech/MIT/LIGO Lab.

That is the theory. However, the activity has had to solve many technological problems to improve the sensitivity of these detectors and detect gravitational waves. After many years of work, the LIGO team finally achieved sensitivity in 2015 to measure gravitational waves and directly detect the first gravitational wave [13]. This result has been one of the most important scientific discoveries of the last century. In fact, the 2017 Nobel Prize in Physics was awarded by scientists Barry Barish, Kip Thorne and Rainer Weiss for leading this project.

So far we have observed the universe through electromagnetic waves (visible light, infrared rays, x-rays, radio waves...), but we were deaf about gravitational waves. Such waves occur in very energetic phenomena such as the clash between black holes or dense stars and the beginning of the universe. In addition, they move through matter, with a very low energy loss, so despite having traversed distant waves, stars and entire galaxies, they reach us with their original form practically unaltered.

We hope that these waves will be detected systematically in the coming decades. Their analysis will allow us to obtain very useful information about the most violent processes in the universe and study the basic properties of continuous space-time. No surprises will be missing.

Work presented to the CAF-Elhuyar awards.