14,600 years of bread as a precursor of agriculture? 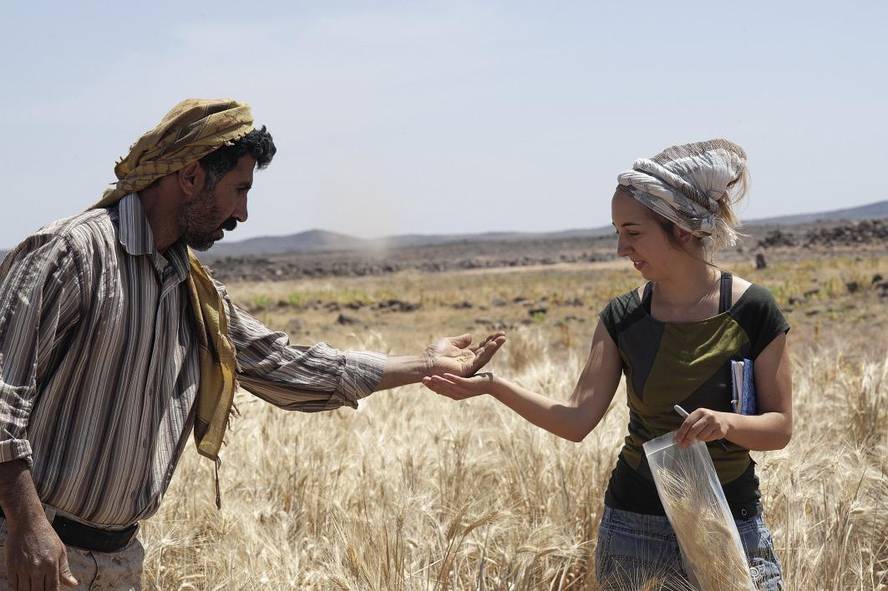 Bread is the basic food found in most of the world. Despite its laborious work, the technology of making bread is “simple”: the dough only needs flour and water. Then, to cook the dough, just a preheated flat stone or hot ashes. And we have achieved a voil, a rich, sustainable and versatile food. In the world, local ingredients such as cereals (wheat, barley, rye, corn...), fruits (acorn), tubers (potato) and other plants (ovelza) have been used. Thus, bread has become the culinary expression of each culture and, therefore, part of the identity. Be baguette, rye bread, talo, tortilla, vaglea, pita, chapatti, focaccia, malooga (Yemen's airis bread) or nana, we always have a piece of bread on the table which we live in Europe, America, Africa and many areas of Asia.

Unfortunately, history has silently hidden the origin, evolution and spread of bread. In the deposits, the large remains that remain in sight, such as stones, bones and ceramics, are the ones that have received the most attention. Smaller traces such as vegetable remains (coals, seeds, etc. ). ), often go unnoticed. Of course, traces of food. Who thought they could also be found!

In the archaeological sites, the food remains are preserved carbonized in most cases, unexpectedly thrown when cooking. The research of these tracks gives us new possibilities to know how the old diet was. So far we have been able to know which species of animals and plants have been exploited (that is, what ingredients they used). Now, in addition to the ingredients, we can investigate what techniques were used to cook these species (toast, fermentation, drying...) and what products were manufactured (bread, beer, papilla…). The first investigations were carried out in the 1990s in the Egyptian loaves (Samuel, 1994), but in the last five years we have begun to systematically investigate this type of marks (Heiss et al., 2015, Gonzalez-Carretero et al., 2017). 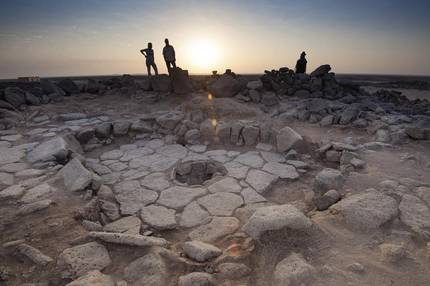 Stove located at the site of Shubayqa 1. ED. : Alexis Pantos.

Being a topic little studied, we have related bread, beer, etc. With the creation of agriculture, in our imaginary. That is, with the Neolithic, with the time when, between 10,000 and 9,000 years ago, domesticated cereals predominate in the Middle East and the first villages are created (Neolithic Era without Ceramics). However, some researchers have proposed that the origin of these foods might be older (Hayden, 1990). Specifically, the hunter-gatherers of the Epipaleolithic era who lived 4,000 years before the birth of agriculture were attributed the creation of bread and beer, despite there being no solid evidence for it.

In the Middle East, Epipaleolith was developed 23.000-11.700 years ago. At the end of this era, between 15,000-11,700 years, the Natuf culture was extended (Bar-Yosef, 1998). Natufarra hunter-gatherers were pioneers in many aspects of Neolithic farmers and ranchers. Among others, the first stone booths known in the world were built and considered witnesses of the sedentary process (Bar-Yosef and Belfer-Cohen, 1989). The relationship with the plants was also modified, special tools were created for the collection of cereals, such as sickle, and the use of mills and syrups for grain crushing multiplied (Wright, 1991). Canine domestication and common burial of animals and humans (Grossman et al., 2008) indicate that the link to animals was modified. In general, the natufarras were complex and advanced hunter-gatherers, but there was no evidence that they could touch their hands, that they showed that they were “able” to make bread and/or beer, until the field called Shubayqa 1 was excavated.

Shubayqa 1 (Richter et al., 2017). The Black Desert extends from the Jebel Druze mountain range, south of Syria, to the north-eastern part of Jordan. Dark stones, beaches or basalt plains (Qá) and temporary rivers (wadi) characterize this black paradise (Betts, 1998). It has been considered that, being a desert, this area did not have great importance in the evolution of agriculture, so it has remained unexplored for a long time. The site was first excavated in 1996 (Betts, 1998). That year, Australian archaeologist Alison Betts and his team discovered the main stone structure, but had to leave the excavations. Sixteen years later, in 2012, Tobias Richter, of the University of Copenhagen, managed the site and resumed the excavations. For four years we excavated two main buildings: remnants of bread in the stoves of the buildings, together with thousands of carbonized remains (Arranz-Otaegui et al., 2018).

The excavation of the stoves was enormous. It was August 2013, we were in Jordan, and the suffocating heat calcinated the basalt dark stones of the Harra desert. The last week of excavation, after six weeks of excavation, we discovered the floor of the main stone shed. In the center of the house was a large stove used for the last time 14.500 years ago. The stove had a circular shape, a meter in diameter and was built with local basalt stands (Richter et al., 2017). In the ashes of the fire there were thousands of vegetable remains, animal bones and utensils of songs. It seemed that the hunter-gatherers who lived there left without time to pick up the kitchen, leaving the remains of animals and plants used. The dream of an archaeologist! It is, therefore, an exceptional occasion to know the last performances carried out by hunter-gatherers. 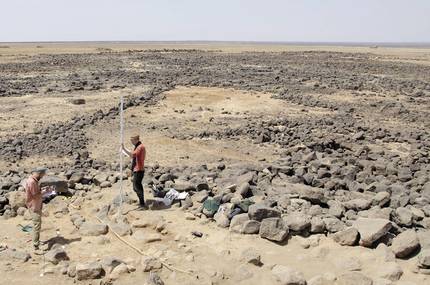 For the collection of carbonized vegetable remains, the soil samples are placed in a tank full of water. In the water, the light remains float and are collected in a small network (Persall, 2000). As in the fire there were thousands of fragile tracks, we first picked up the land and passed it through the sieve. After the screening, I realized that there were carbonized remains “amorphous” and unknown. They were neither coals, nor seeds, nor pieces of tubercle. After finishing the excavations, I went to London with curiosity about what these “amorphous” traces were. I decided to consult the reference collection of the Institute of Archaeology of University College London (UCL), a modern plant footprint identified among botanists. I never thought that going there would have unexpected consequences.

Lara Gonzalez Carretero was a doctoral student at UCL and her thesis focused on the creation of bread. For this purpose, he investigated materials from the famous Turkish site of the Neolithic Çatalhoyuk (Gonzalez-Carretero et al., 2017). Using the scanning electron microscope, a high-definition microscope with resolution up to one nanometer, showed that his “amorphous” traces investigated in his site were bread and papilla. Until then, the origin of the bread was located in Çatalhüy, about 9,000 years ago, in the Conia valley of Turkey. But, still, those “amorphous” and rare traces found in Shubayq were in London, without investigating. While working in the laboratory, Gonzalez-Carretero came and observed the tracks he had on the table: “Look! Here too there is bread! They are exactly the same tracks I have on Çatalhöyük!” I looked at him surprised saying: “That’s not possible, Lara! They are materials of 14,600 years, from the Natuf era!”

The work carried out in the coming months showed that Shubayq’s “amorphous” traces had the same characteristics as bread, for example: porosity (structure created by air bubbles); and small plant structures such as bran, outer layer of cereal grain (similar to that which we can find in all grain flours). We compare the remains of Shubayqa 1 with the remains of Gonzalez-Carretero, as well as with other remains of bread found in Europe. The results of the analysis were published in the journal Proceedings of the National Academy of Sciences USA last July (Arranz-Otaegui et al., 2018). This study allowed to know what the main ingredients of the bread were and how they could do it.

The pioneering bread manufactured by the Natuf was of various ingredients. On the one hand, wild cereals such as wheat, barley and oats were used. But in addition to cereals, we find remains of tubers of an aquatic plant of the same family of papyrus and chufas (Bolboschoenus sp. ). These tubers obtained flour to the grinding. Then the tuber flour was mixed with the cereal flour and the pasta was made. In the absence of ovens to cook the pasta, we believe it was placed on a hot stone or between hot ashes. 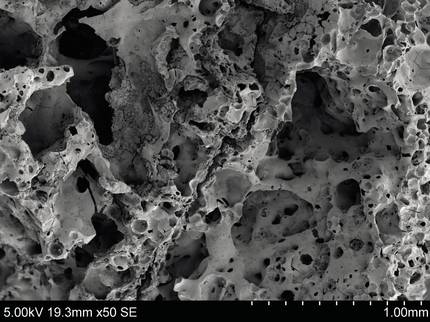 Charred bread found at the site of Shubayqa 1. The footprints were analyzed with a scanning electron microscope that allowed identifying the structure of bread and vegetable remains and comparing them with others. ED. : Lara Gonzalez-Carretero and Amaia Arranz-Otaegui.

The hunter-gatherer's transition to agricultural development was a fundamental step in human evolution. Archaeologists have been investigating for decades, for centuries, when, where, and why this transition occurred. But taking into account the latest data we can affirm that this transition was not, basically, an economic or symbolic “revolution”, but a food revolution, that is, a matter of taste. The discovery of bread tells us the gastronomy of 14.600 years ago. But this raises even more questions: Was bread a daily food for hunter-gatherers of the Natuf era? Or was it a luxury dish? Did you encourage us to grow cereals? Future archaeological and botanical research will try to answer these and many other questions.

So when the next time you are putting the bread in the toaster, bite to a croissant from the bakery or wait in the queue to order a talo, remember for a moment your ancestors of the Epipaleolito, who first mixed flours made with different plants and created our daily bread.