Artistic representation of the disc and top crown around black holes. The study of the evolution of both elements has allowed scientists to draw up a more detailed mapping of black holes. Ed. NASA/JPL-Calt

Two studies published in the journals Nature and Science shed significant data on black holes. On the one hand, astronomers have charted the outline of a small black hole to clarify its nature and, on the other, have found a way to calculate the rotation speed of black holes.

The NICER X X-ray telescope of the International Space Station has been used to map the black hole environment. In March 2018 a small black hole called J1820 was first detected when he was swallowing the matter of a star that passed by his side. In a few days, the black hole went from being totally unknown to being the brightest X-ray source in the sky. During this ingestion, the explosion of x-rays was detected, but the echo of those x-ray waves was also detected and they realized that they reflected a gaseous whirlpool around the black hole. 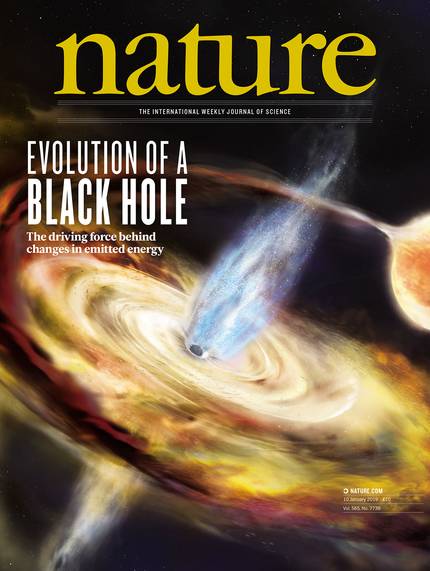 The research has been the cover of the journal Nature. Ed. Aurore Simonnet & Nature.

In fact, all this matter absorbed by black holes gives rise to a disc of gas and dust around. When moving at an enormous speed, the atoms of the disk are decomposing. Thus, protons and neutrons remain on this disk and electrons create a kind of cloud over the black hole, known as crown. So far it was not clear how the crown and the records around evolved over the small black holes, but by investigating the echoes of the X-rays, this new research, led by the University of Maryland (USA), has shown that the crown is the one that is contracting during the process, not the album, although it was believed to be different.

So far, only supermassive black holes detected this type of luminous echoes, but huge black holes present very slow variations. This small black hole, however, has a much smaller mass and evolves faster. Therefore, they have been able to see changes in the scale of human time.

On the other hand, the research published in the journal Science has served to clarify how black holes are fed. In 2014 several telescopes received strong x-ray signals from a remote galaxy that were repeated every 131 seconds. It was the signal of the supermassive black hole in the center of the galaxy, created when it attracted and devoured a passing star too close.

According to the authors, the signals emitted in this type of events allow to measure the characteristics used to define black holes: mass and rotation. Until now, scientists believed that the mass of a black hole could be deduced from the characteristics of their galaxy, but that it was difficult to determine any spin. However, the authors of this paper consider that it is possible to infer this information from the signals received and suggest that the rotation speed of this black hole can be approximately 150,000 km/s.