The Palaeolithic needles were the Noailles Goat leather perforations are very effective and UPV researchers UPV-EHU researchers have proposed that they can be superior paleolithic toys. Ed. Related information

Noailles perforations are very common in deposits between 29,000 and 21,000 years ago. Especially in some sites in the Basque Country, the Pyrenees and southern Europe, where thousands appear. They are as enigmatic as conventional ones, as it is not clear what they were used for. Studying the Noailles of the cave of Isturitz, researchers have concluded that they were the needles of the Upper Palaeolithic.

The researcher Aitor Calvo, in the hands with the Noailles calf. Ed. Nuria González

The Noailles are small unperforated stone utensils, with a maximum length of 3 cm and a maximum width of 2 cm. and are made of rock. They have a pronounced tip. Studying the microscopic marks of Zulakaitz have known what they used them for. “When using any firestone instrument, wear marks appear. Different types of marks depending on the activity and the material worked. After analyzing them we have known that they were used to work leather or soft materials,” explains UPV researcher Aitor Calvo Martínez de Guereñu and one of the authors of the work. “But we have also done a direct experimentation: we made replicas of the needles and worked the goat’s leather. They were very effective piercing the leather. Moreover, when we compared the marks of archaeological sites with our replicas, we saw that, with great amazement, they were very similar. Therefore, we believe that the Noailles of the Isturitz cave were mainly used to pierce animal leather.” 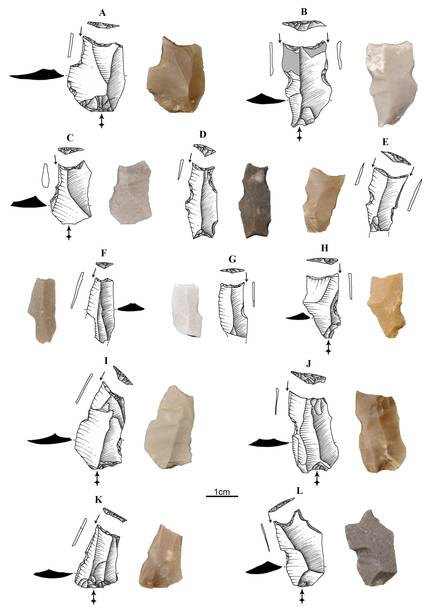 In the archaeological record of other deposits of the time, the Gravette, there are elements that join this conclusion. In fact, in the tombs of the Russian site of Sunghir and of the Italian deposits of Arene Candide and Ostuni, hundreds of small balls or specimens have appeared that were probably sewn in trajectories. Thus, researchers from the Department of Geography, Prehistory and Archaeology of the UPV/EHU have come to the conclusion that perforations of Isturitz.

It is to be expected that throughout Europe there is one of the most important deposits of the Gravette, but in the cave of Aitzbitarte III also appeared thousands of Noailles' rocks. However, the few analyses carried out so far have identified other types of actions that were carried out with other materials, but the perforations of Isturitz do not serve with more resistant materials or with activities of greater intensity or duration. Thus, Aitor Calvo and his co-workers have published the Journal of Archaeological Science: Revista Reports.