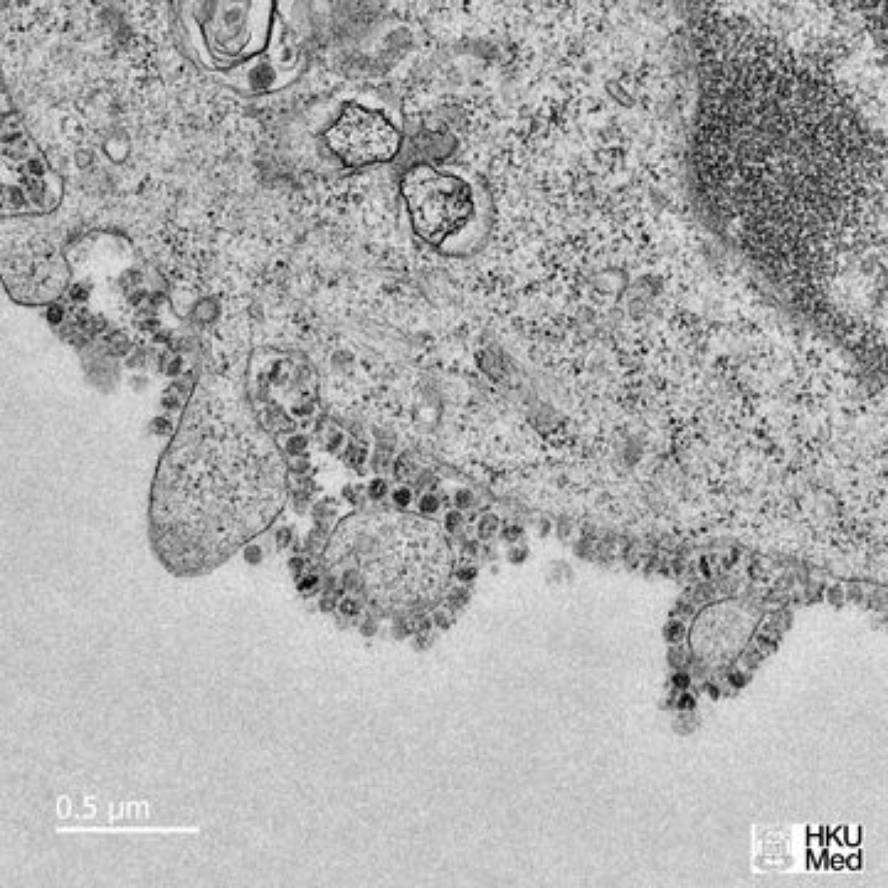 2019-nCoV coming out of the infected cell after multiplying it. Ed. John Nicholls, Leo Poon and Malik Peiris/University of Hong Kong

The coronary infection, which began in Wuhan (China) and has already spread internationally, has generated numerous questions and a flood of information. But quality communication has been accompanied by disorders, misunderstandings and false news. Therefore, some concepts should be clear:

Coronavirus is a set of viruses that host many species. They are made up of RNA, protein canpside and envelope and, through the electron microscope, they are seen a corona structure (hence its name).

Zoonosis is a disease that is transmitted from animals to humans. Nearly two out of three infectious agents that affect humans are zoonotic, SARS, MERS, and viruses that have now caused a health emergency.

Both the SARS and the MERS were originally bats, from which they jumped to another species (the peonza and the camel, respectively) and through them they reached humans. Being new to us, the immune system is not able to resist, hence the ability to damage them.

In the case of the 2019-nCoV virus, early research suggested that the original deposit could be a snake. Some researchers immediately doubted this, as all existing coronavirus have been found in mammals and birds. Now, another study has shown that it is very similar to the SARS virus (79.5% of the genome is the same) and that it comes from bats.

The pandemic is an epidemic spread all over the world or in a very broad territory. Examples of this are the 1918 flu in the past and AIDS today.

In order for the pandemic to occur, the virus, in addition to being a new antigen for humans, must be able to transmit it from one person to another. In fact, someone may become infected with a virus of animal origin, but if they are not able to infect someone else, the chain breaks.

They have shown that the new coronavirus is also transmitted from person to person, in the air and in the particles transported in the skin (hands). However, its durability in objects and surfaces is not prolonged, so it is not contaminated through commercial products.

On 30 January 2020, the World Health Organization (WHO) declared an international emergency, especially to prevent damage that could result from access to countries with vulnerable health systems. In parallel, China supported measures to limit plague and reduce the risk of contagion, and encouraged other nations to be alert and take the necessary measures.

In addition, he continued to investigate with transparency and collaboration in the identification, diagnosis, adverse treatment and development of the vaccine.

Mortality indicates the number of people who die in a given population for a time. On the contrary, lethality indicates how many die from infected people.

The trend of the new coronary system is not yet well known. When compared with seasonal flu, for example, it should be noted that a large part of the population is infected with the flu virus and that most of them do not become ill or overcome the symptoms caused without serious consequences.

For their part, those infected with the new coronavirus are less numerous (17,391 on 3 February according to the WHO) and have caused fewer deaths than the flu, taking into account the entire world population (362, all in China, except one). However, among those infected, a greater lethality has been detected than the flu. In any case, for the moment less than the MERS virus, for example.

The number R0 indicates the number of people who are infected by a sick person. It is an average and if it is higher than 1 it means that the disease expands. The higher the number, the faster it will expand.

It is not easy to calculate the number R0, as there are many factors that influence and change over time. Some sources have reported several R0 numbers of the new coronavirus, but the WHO indicated that it is between 1.4 and 2.5 (one week before the emergency was implemented).

The key to lowering the R0 number is vaccines, as they reduce the number of potentially polluting people. Despite the efforts being made to develop the Coronavirus vaccine, they do not expect it to arrive before a year.

While several research groups are working to get the vaccine, other laboratories have begun testing antiviral therapies against the virus. Some of them are already used to cure diseases caused by other viruses. For example, Wuhan has tested combinations of antivirus against HIV (Lopinavir and Ritonavir).Another antivirus, Remdesivir, was used against MERS and they hope that 2019-nCoV will also be effective. Others are completely new and now trials begin.